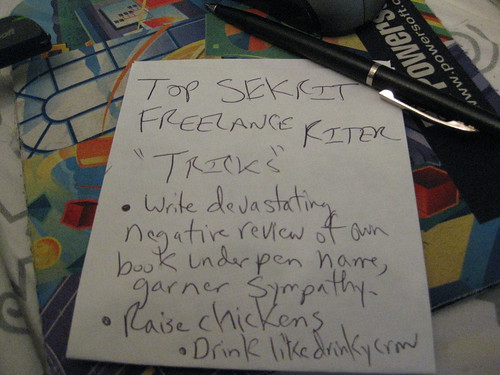 From talking to a lot of writers who have lived off of their fiction much longer than I have, I’ve gained some useful perspective on what they do when times get particularly tough. Here’re what seem to be the top ten tips for survival, in case it’s of use to someone. I’ve ranked them from most used at #1 to least used at #10.

#1 – Go outside at dawn to lap up dew from leaves after the water’s been turned off. (Alternatively, scour backyard for “insect protein”.)

#2 – Mug the kid of the other freelance writer on the block for the pen knife, dollar fifty, stale cig, and rusty old bike with training wheels he took off of your kid the month before.

#3 – Throw self (in several layers of clothing) in front of slow-moving cars for insurance money.

#4 – Rationalize (and try to write off) living in tent by freeway with a guy named Spazzo as “research.”

#6 – Start writer gigolo/escort service called “If No One Else Is Available…” and put free advertisement in local edition of “Mug Shots” newspaper.

#7 – Find copies of latest tanking book, put three in an old B&N bag, and attempt to get refund at local store by claiming your three cousins already had The Talking Spleen of Tribeca County.