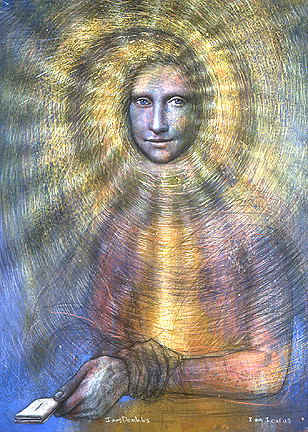 (Scott Eagle; saint of connectivity, holding a booklet as offering)

Friday I posted the following question on Facebook: “Has anyone studied the environmental impact of e-readers, in the context of knowing cell phones are full of all kinds of narsty things? It’d be awful to find out physical books are actually more environmentally friendly.”

The resulting discussion is archived below. This is by no means a systematic analysis, but given that participants like Tom Winstead work in industries where he has first-hand knowledge of the resources required to make certain technologies work, it’s pretty interesting.

When I joke/not-joke about how in 70 years physical books will be back in style because the Internet and electricity will be things of the past–or used only for essentials–people often don’t get the not-joke part. And maybe it is extreme to think about the future of civilization in those terms, but as the conversation we had on Facebook shows, there are serious issues concerning sustainability…of everything.

Todd Pollman at 12:00pm July 10
A quick look at Google – there are a few layman attempts at adding up the EI but nothing I can find professionally yet.

Tom Winstead at 12:04pm July 10
You’d have to analyze the manufacturing impact of the glass (and electronics associated with the display), the semiconductor content, the battery content (probably the worst), and the plastic. Assembly (everything would have to be RoHS compliant, but it would add some)…then add the packaging, paper/plastic and shipping…With books you just have to chop down a bunch of trees.

Erin Kennedy at 12:09pm July 10
Guess that just depends on how many books you have on your e-reader. :)

Minister Faust at 12:11pm July 10
On the more serious side: more than the environmental issue, I’d be concerned about the E-book’s use of coltan, a critical component in virtually every modern electronic gadget. If *Dune*’s melange needed any more parallels, this would be the latest. And the massive human rights cost is the ongoing international destabilisation of Democratic Republic of Congo in order to access the world’s greatest supply of coltan (among other metals), part of the third century of appalling foreign murder in that country (whose greatest peak, soon to be rivalled by the modern death-toll, was the late 19th century Belgian holocaust which claimed 8-10 million lives).

Erin Kennedy at 12:15pm July 10
Coltan is also what terminators are made out of, right?

Matt Bell at 12:21pm July 10
The backend is environmentally costly too–The server farms that run the internet now use the same amount of power as the entire country of Sweden, according to an article I read recently… So when we stop cutting down trees to make books, we’re still going to have to burn fuel to keep all our stuff running, connected, and filled with delicious content.

Edward Morris at 12:26pm July 10
Coltan comes from the Congo, among other places. The atrocities people commit over there to steal/black-market that stuff would be right at home in Ambergris.

Chuck Gannon at 12:28pm July 10
I think there’s almost no way readers could be comparatively green friendly. Conversely, depending on how you structure tree growth and harvesting (i.e.; that you have 20 years of crop-trees under planting at any time) that is a huge net positive in terms of carbon conversion and oxygen production. Better still if you go with green harvesting … Read Moretechniques driven by sustainable energy. The problem there is NOT technology, but expense (start up costs, at least). And then there’s chemical treatment of paper: same problem. Green means exist–but more cost (at first) is involved. So yea and go paper books. Which also don’t give a damn about EMPs, whether artificial or natural (CME). I love necessary new technology, and can accept that some of it is going to be grey, not green, because of irrefragable material requirements. That said, I don’t have a reader. Hmmmm: wonder why…

Erin Kennedy at 12:29pm July 10
If we could just make e-readers out of corn and hydrogen and burn pig poo to charge them, there would be no problem…..

Todd Pollman at 12:35pm July 10
Matt’s comment reminded me of how Google’s new server farms air conditioning requirements couldn’t be accommodated by CA’s powe grid–a problem that’s going to get worse in The Future ™ given e-delivery’s (another E.D.) rising prominence.

Jeff VanderMeer at 12:38pm July 10
Erin: Pig poo! OMG. I’ve got this sudden vision of Sony e-reader owners keeping a pig in the backyard and going out there to “fuel up” every few days.

Tom Winstead at 12:44pm July 10
Coltan isn’t the be-all-end-all evil content here, but it’s not good. Check the Wiki post: Manufacturing processes, transportation, all other materials, and end-of-life material disposal would far outweigh the damage of one mineral component.

Erin Kennedy at 1:27pm July 10
Jeff, I was thinking more like this.

Jeff VanderMeer at 1:30pm July 10
How great, though, if you could just roll up and smoke a bad book? Erin–checking link now. Georges T. Dodds at 1:53pm July 10
There was a law enacted recently in the US to limit the resale of old toys and books because of their possible lead content…enraging many librarians and used book dealers who would have to have books tested for their lead content– at a prohibitive cost — old books (particularly those with coloured illustrations) were mainly targeted — so some paper books might not be as innocuous as they seem, though you’d have to literally devour them to feel any ill effect…

John Kenny at 3:37pm July 10
I read recently that the impact of internet searches has an appalling impact on the environment. Ditto FB and other networking and blogging pages and BBC iPlayer, etc., etc. Seems we can’t move a toe without killing ourselves and the planet. Bummer.

Gary Gibson at 11:26pm July 10
As Tom Winstead briefly alluded, the transportation costs of shipping paper books has to be factored in as well: also their disposal when large amounts of them are pulped. That’s power and fuel to run the distribution centres and warehouses, the trucks that deliver to the bookshops, the power and fuel to run and light *them*, then ship the books away again when they’re unsold, etc, etc …