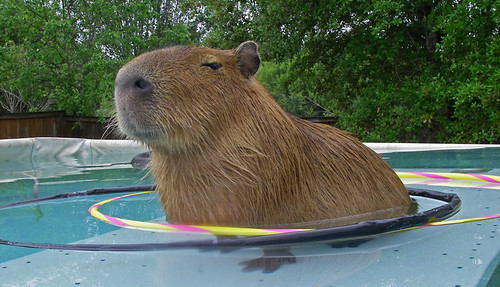 My first encounter with a capybara was sad and strange: I saw one in a cramped cage at a county fair as a teenager. In amongst the rides, the shooting galleries, and the weird food, just this tiny cage and this incredibly peculiar creature that I’d never seen before, or even imagined existed. It had unbelievably beautiful eyes. Ever since then, I’ve been fascinated with capybaras because they seem so fantastical and they also have this gruffly wise look to them. (I only wish I had found some way to rescue that first one from what couldn’t have been a great life.)

Recently, I had a dream about capybaras, and, astoundingly, a capybara named Caplin Rous, responded in the comments! This led to further investigations, and the discovery that Caplin Rous lives in Texas, and that Melanie Typaldos dons the Caplin Rous (Rodents of Unusual Size, if you remember your Princess Bride) persona for her website devoted to her capybara. Not only that, Typaldos has just released a kid’s book called Celeste and the Giant Hamster, which does include appearances by a capybara. (The book is well-written, clever and interesting–definitely worth buying.)

It seemed only natural, given the topics that crop up on Ecstatic Days, to interview Melanie Typaldos about Caplin Rous, as wonderful a capybara as I’ve ever seen. The answers about capybaras may surprise you, including what sounds they make! It’s just a great interview.

How did you wind up with a capybara in Texas? And had you ever had one before?

Six months before we got Caplin Rous, I went to the Los Llanos region of Venezuela with my two grown children, Philip and Coral. One of our goals was to see capybaras in the wild. We were lucky enough to see quite a few of them… actually hundreds, maybe thousands. Our most amazing experience was holding a three-month-old capybara that our guide simply picked up off the road one evening. The docile nature of that capybara in our first up-close experience started us thinking that a capybara might make a good pet. When we got back to Texas we researched capybaras on the web and found surprisingly little information on their suitability as pets. However, we did note that some sites stated something along the lines of “commonly kept as pets” with absolutely no data to back the claim. 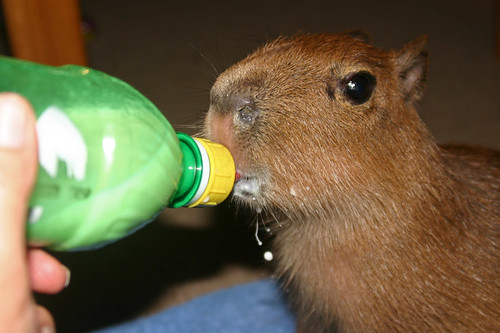 What kind of a pet is a capybara? How smart? And what kind of temperament?

When we questioned locals in Venezuela, they stated in no uncertain terms that capybaras are the dumbest animals on the planet. Our experience is quite the opposite. Caplin is at least as smart as a dog, although differently motivated. He won’t do anything if there isn’t something in it for him. It seems like he recognizes every person he’s ever met and reacts differently to them. In general, he is a very sweet and affectionate animal. He likes to sit on the couch next to me or in my lap while I feed him treats. Since he weighs 100 lbs, I can only have him in my lap for a few minutes before it starts cutting off circulation in my legs. At night, Caplin likes to sleep under the covers if the weather is cold, or on the floor beside the bed in warmer weather.

In a single word, I would describe him as needy. He always wants to be with me and can “eep” loudly if he knows I am nearby but he can’t get to me. He follows me around the house and the yard and expects me to watch him while he swims or grazes. He panics if he doesn’t know where I am. When he thinks it’s time for me to come home from work, he will go to the gate and wait for me. 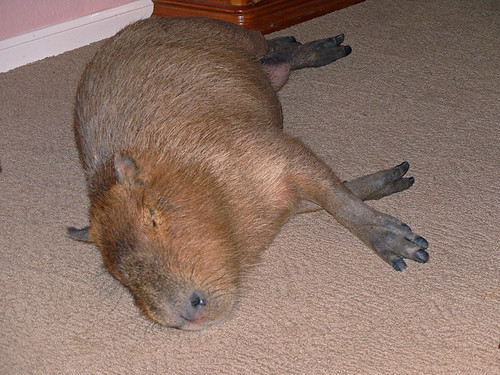 How on earth did you train Caplin Rous?

Like many rodents, capybaras are very smart and Caplin is no exception. When he was a month old I taught him to shake hands by saying “shake” and tapping his paw until he picked it up. It took 15 minutes for him to figure it out. The last trick I taught him was to go in a circle when I signal. I saw a video of a capybara in a zoo in Japan that could do this trick. There aren’t many other capybaras that can do any tricks at all and I didn’t want the Japanese capybara to one-up Caplin. To teach this I used one of his favorite foods, a fruit popsicle. Keeping the popsicle just out of reach, I led him in a little circle, rewarding each correct step. After two popsicles, he knew the trick.

What is it that you like so much about capybaras?

What I love most about Caplin is how much he loves me and how smart he is. I also love his noises. When people hear him they are always amazed. His voice is often mistaken for a birdsong. When he’s nervous he sounds like the dinosaurs in Jurassic Park. When he’s happy he sounds like a Geiger counter. 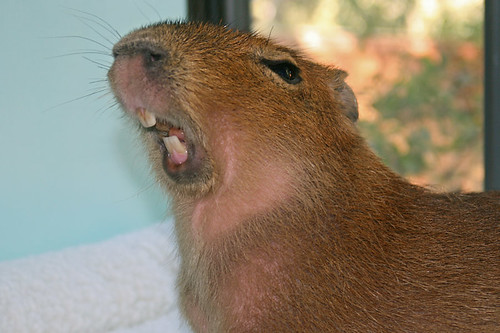 Do people do double-takes when they see Caplin Rous for the first time? I shared photos with friends and they thought they had been Photoshopped.

I take Caplin out in public a lot just because I like to have him with me. It is fun to watch people’s reactions. Most people have no idea what he is and some take that as a personal affront, angry that such an animal could even exist. But most people are excited and enthusiastic about him, often referring to him as a giant hamster. That usually means they like him. Those who refer to him as a giant rat are more likely to be afraid. He is confused with a variety of animals such as tapirs, wombats and peccaries. One thing that amazes me is that very small children in strollers who can hardly speak a dozen words will point at him and say, “Mouse!” They are almost better at making that connection than adults are.

How many other animals do you have? Does Caplin get along with all of them?

We have four horses, three rainbow boas, two leopard tortoises and a rabbit. Caplin and the rabbit are great friends although we constantly worry that he’ll step on her. The tortoises sometimes invade Caplin’s corner of the yard and he will do his threat display of clicking and barking to try to drive them off. They ignore him. He is scared to death of the snakes, probably imagining they are anacondas. Of the four horses, only the oldest and gentlest one is allowed near Caplin. I don’t trust the others not to paw him out of curiosity.

Does Caplin Rous roam free? And do you need a permit to keep Caplin?

I treat Caplin just like a dog. He goes in and out of the house at will and has pretty much free roam of the fenced area. I don’t let him out at night because we have coyotes that sometimes come near the house. When we’re outside the yard I always keep him in his harness and leash. Catching a capybara is something like catching a greased hog with their similar body shape and his tendancy to be wet and covered with mud.

Where I live in Texas, no permits are required to own a capybara but this is not true in many places. State and local restrictions may apply. New York and California have particularly stringent rules concerning rodents. 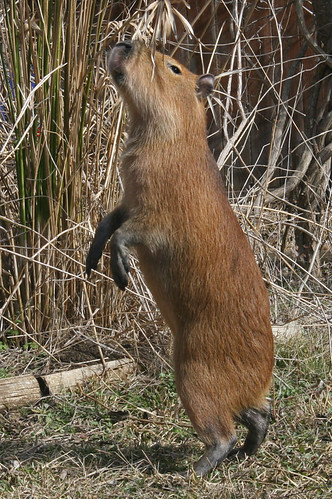 It’s hard to pick just one aspect, but I think I love his noises the most. Since I used to do pharmaceutical research and had frequent occasion to use a Geiger counter, I never would have thought that sound could bring a smile to my face the way it does now.

Did Caplin play a role in the writing of your book?

Caplin was the inspiration for my book. My granddaughter wanted a book about cats but I soon found the capybara taking over the story. The cats mimic human reactions including fear, anger, curiosity and surprise, finally resulting in friendship and acceptance when they get to know the capybaras in the book. Without Caplin, I would not have known about these reactions or about capybara behavior, which is very poorly documented. 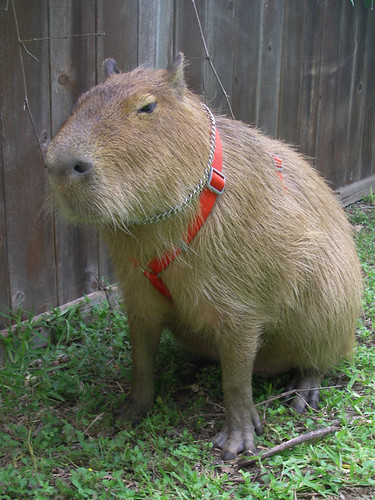 When did you start pretending to be Caplin Rous? What do you find interesting about inhabiting the persona of a giant rodent?

One day as I explored MySpace I noticed that a surprising number of guinea pigs had their own pages. Just for fun, I created a Caplin page. He immediately attracted friends, either people or “anipals,” who were interested in capybaras. Since I’d had so little luck finding information about pet capybaras, I wanted to do my part to contribute to the knowledge base. Even though the blog entries are written in Caplin’s voice, they contain a lot of information about his behavior, both good and bad. The day Caplin bit me I posted a blog expressing both of our confusion over the event and his subsequent hostility. Over time, I realized he intended me to be part of his herd and I was not cooperating. Eventually we worked through this. I also kept a chart of his growth and had him discuss his medical issues, which included a brief period of paralysis following neutering. New capybara owners now have a little more information about what they are getting into than I did when I got Caplin.

What about capybaras do you think would come as a surprise to someone who doesn’t have one as a pet?

The existence of capybaras surprises people more than anything else. Once they get over the shock of a giant rodent, they tend to admire his calm demeanor. When Caplin does a trick, such as shaking hands, they are surprised by his intelligence, frequently claiming that he is smarter than their dog. I think he is just better trained.

People with some prior knowlege would be most surprised by what active and agile swimmers they are. If you see capybaras in the zoo, they are almost always doing nothing. Caplin is a very graceful in the water, more like an otter than a dog. He has an above ground swimming pool that is about 15’x10’x5′ and he zips around underwater, putting his forepaws against his stomach and pushing off with his hind feet. I love to watch him play with his pool toys. He especially loves to swim through hoops. 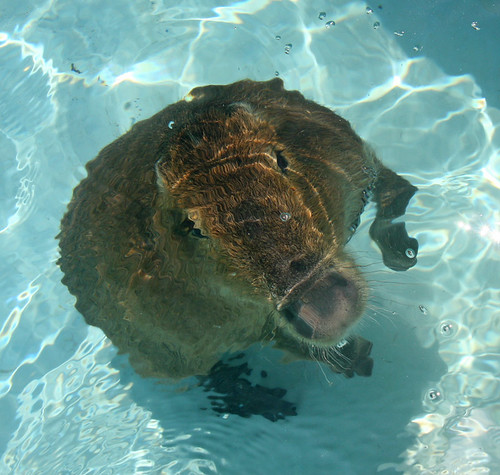 UPDATE: Just a couple of videos added, in response to some comments below. First of singing. Second of meeting other capys (can hear some capy noises). Third of something silly…More on YouTube.

113 comments on “The Fantastical Capybara: An Interview with Melanie Typaldos About Her Caplin Rous”