“First and Short” is a new Ecstatic Days feature that reviews first books that happen to be novellas. Since books fitting this definition are usually published by indie presses, this feature serves the dual purpose of highlighting new authors and unique publishers. It in effect replaces the “Conversations with the Bookless” interviews that have now migrated to BookSpotCentral. Please send materials for consideration to POB 4248, Tallahassee, FL 32315 USA, marked “for First and Short”. Thanks–and please feel to spread this link to those who might be interested. 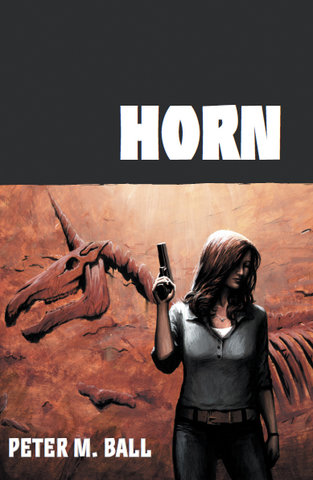 Recombinations of the mystery genre with fantasy have been getting stranger and stranger. In a way–inadvertently–the innocuous Harry Potter series started this trend, with the first three books fusing wizards with tea cosy plots, complete with lengthy explanations in the study to end it all. We’ve also seen the often cerebral and perhaps a spot too organized mix of fantasy and police procedural. But lately also a more dangerous and rowdy sort of hybrid has been making an appearance: fantasy mixed with hardboiled noir (undiluted by the romance of “urban fantasy”).

Peter M. Ball’s debut, Horn, takes elements of faery and places them within a hardboiled context, and by doing so renders the fantastical as sordid, tactile, and often gruesome. The story is relatively straightforward but contains rather delicious details: Miriam Aster is an ex-detective turned PI who still gets called in some cases, usually to the morgue, due to her past as both the lover of the exiled Queen of the Fairies and having once been brought back from the dead. In Horn, she’s brought in on a death related to a rampant unicorn.

At times, the effect of this fusion reminded me of Michael Swanwick’s The Iron Dragon’s Daughter, because Horn de-romanticizes and de-mystifies its fantasy element. In a sense, it makes faery mundane, but in interesting ways. A casual throw-away line like “Somewhere in the bowels of the building, he was feeding the corpse of Sally Crown into the morgue incinerator and hundreds of newborn fairies were dying” lends a kind of rough legitimacy to the milieu that’s lacking in more whimsical treatments.

In most places, then, the details of a unicorn’s lustful killing of a girl seem necessary and properly brazen. “Yes, this is the cruel reality of the soft-lit, tiptoeing, residing-in-a-mythical-garden unicorn” Ball seems to whisper in the background. Where this conceit shivers into excess, it’s because of repetition as well as the short length of Horn. Having already witnessed the horrible magic-tinged autopsy of the girl, a later scene showing the actual murder tells the reader nothing that wasn’t more skillfully rendered earlier. It also robs Ball of the opportunity to substitute something more original and less voyeuristic. Finally, it unnecessarily victimizes the girl again, in a context in which we know nothing about her to begin with, and the writing in the scene is not as convincing because the gratuitous nature of the events cannot help but leak into the prose.

The noir elements, meanwhile, involve a seedy drunken fairy and an equally seedy nightclub. Ball writes these scenes with a sturdy terseness, giving Aster authority and innate toughness through the prose. I would’ve liked more context about the full dynamic of the fairy-human history of interaction and a few more thumbnail images of a fairy presence to liven up the setting in the absence of local color. But Ball clearly knows his noir, and if some of the set pieces feel a little generic, he makes up for it with the concise layering of information about Aster into his narrative. A no-nonsense approach to dialogue and exposition doesn’t hurt.

There are very few wasted words in Horn. From the perspective of narrative, Ball shows early mastery of a sometimes tricky form. This mastery breaks down somewhat in scenes where Ball needs to modulate his approach–like a gun battle in the near-dark that seems confused more because Ball hasn’t properly blocked his scene than because of the character’s confusion in the moment.

But these caveats aside, I was continually impressed by Ball’s economy of expression, blending of genres, and his ability (in the close quarters of a novella) to not just layer in information about the characters but also about character motivation. The ambition in Horn may exist mostly at the level of scene and character without too much additional complexity of plot or situation, and it may veer toward the sensationalistic once or twice, but overall the book is a promising, strong debut by a new Australian author. I’ll be interested to see what Ball can do with a deeper concept and a wider canvas.

4 comments on “First and Short: Horn by Peter M. Ball”