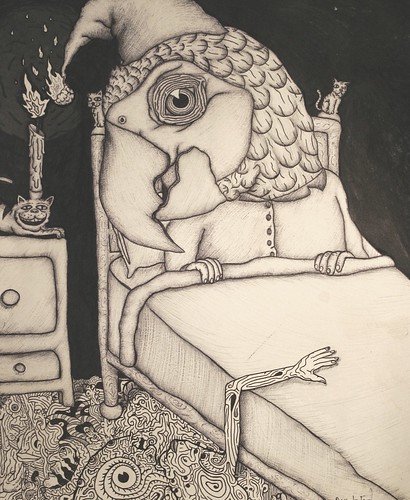 I dreamt of a falling apart hotel in some tropical location. It was on the side of a mountain and it swayed on stilts like something alive trying to break free of its restraints. Ann and I were staying there on holiday. The help staff had all been former members of the government in that country, but deposed during a coup. They had established their own form of Marxism within the hotel, which meant that the guests had to do the cleaning up along with the maids, help cook the food, etc. At night, the staff became hideous animals that roamed the halls, their cries indistinguishable from the gusts of wind. So you had to barricade your door. For some reason, perhaps because we had no choice, we would pretend we didn’t know that they became animals, even when their mouths were blood-smeared in the morning. We would relax by the pool when we weren’t helping with chores and talk like nothing odd was happening. Some of the other guests couldn’t keep their cool and went mad, so dinners became a strange mix of amazing food, curt staff, and people who could not control their nervous tics and their stammering from the stress of it all. Meanwhile, we could tell that the hotel was losing its bearings–that it was coming closer and closer to just breaking apart and falling down the side of the mountain. There came a day when we knew the end was near. The staff had begun to go feral during the mornings, too, so we couldn’t have breakfast until noon. The varnished wood of the floors had begun to snap and crack. We stood on the edge of our hotel room, now with the whole outer wall having slid down the mountain. Behind us the insane guests and the staff stuck in transformations between animal and human. I asked Ann what we were going to do. She laughed and said, “we’ll just fly away.” I said, “how are we going to do that?” She just cawed back at me, flapped her wings, and then we did indeed fly away, never to return.

I dreamt of a land of talking capybaras and their guinea pig minions. They were in a war against a land of meerkats and their vole minions. It was not cute. It was not whimsical. I was their secret weapon. But although I could describe advanced weapon tech I could not build it. Funny thing about the dream…we were in the General capybara’s command-and-control tent the whole time with the guinea pig subords running in and out of the flap while the capybaras plotted strategy around a map of their world on a table. The capybaras were human-sized. All very serious and gruff. It was pretty musky and muddy in there–just planks on the floor and then the dirt/mud. It must’ve been raining outside. So I never saw the world, just the inside of this tent with these serious capybaras asking my advice on strategy and weaponry. Some of them wore helmets with spikes coming out of them like the Kaiser’s soldiers during WWI. They had little colored pins stuck in the maps and little plastic models of their capybara infantry and some cavalry, although I never did find out what a capybara might ride. The dream ended because I kept getting smaller and smaller and eventually I fell through the eye of one of the capybara officers and into a vortex of black light.

I am huddled under a freeway overpass with a bunch of other homeless people and some cats. The cats appear to be there by choice. An old man sitting next to me starts telling me that sometimes an old cat will find a way to become a new cat. It will crawl under the bed, or the couch, or a chair. Once in the underneath, it will curl up into a tight ball. After it has done so, a smooth cocoon, usually white, will form over the cat. For several months, the cocoon will remain under the bed, couch, or chair. Then, when the time is right, the cat will break out of the cocoon. Except it is no longer a cat. It has developed wings. Wings and other senses we cannot know of. Its eyes are like the bearing rods of some infernal device. Its claws are soft. Its tail becomes like a separate creature. At night, when its owners are asleep, the cat will rise to the windowsill, open the window, and fly outside. Once in the open air, the cat will goâ€¦well, no one knows where the cat goes. How can anyone know where the cat goes? You’re crazy I say to the old man, but he’s not an old man anymore, he’s a cat. And he’s larger than the old man. And I’m pretty small. That’s when the cops come and the ambulances and the dinosaurs and it all goes extremely hazy.

I dream I enter a house that has a U-shaped corridor and the remnants of animals and birds, still living, and all kinds of horrible stuff happens: “A muttering rose from the displays that had been left there, behind a torn, bloodied, sometimes shredded, cross-hatching wire. What lay behind was squirming flesh mottled with fur, an eye or two glancing out from the mess with an odd acknowledgment of fate. A spasming claw. A quivering snout. There was no great seriousness or order to this exhibit. These creatures, neglected and left without food or water, had half devoured each other, and by their nervous natures had consigned themselves to an ever-contracting existence. They would not leave the ledge on which theyâ€™d lived their lives to that point. Now they were deranged, and lay on the border between life and death without knowing the difference.” In this case, I wrote the dream up as a story, and added a companion because I didn’t want to be alone when I wrote the story. This “dream” I woke up screaming from in the middle of the night because I had experienced–with all the visceral intensity of something real–being locked in a transparent glass box jammed so full of half-mad, half-dead starlings that they could not fly. (The story is online here.)

P.S. The capybaras did look a little like this. Some of them did read books and wear glasses. (Per the comment downstream…)

And there’s one of the guinea pig minions!!!

19 comments on “Three Dreams and a Fabrication”