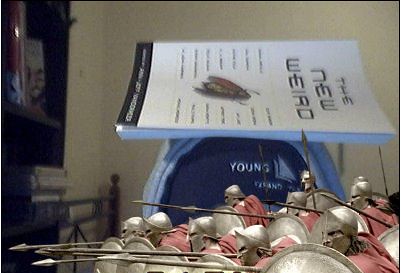 (Stolen from Silence Without. It ain’t no hat, that’s for sure. It ain’t a beard, neither. It might be a cookbook, if you hold it in the right light.)

Well, or a not-so-lazy Sunday. A working Sunday…

A great post on money management from Kristine Kathryn Rusch. So true. I remember how much of my first big advances I blew on stupid things. I still have the thirteen pairs of shoes to prove it. Even now, I am not as smart as I could be on these issues, but I’m learning. The best advice, too, for a first-time novelist, no matter how big the advance is: DO NOT quit the day job until you are assured of further writing income, and even then you’d be well advised to ween yourself off of the day job incrementally–go part-time and see how that goes before making the final leap. Fact is, even a 75k advance has been known to be followed by…nothing…depending on the vagaries of the business. Earlier this year, I made another kind of mistake. I counted on a book deal because the contract was on my desk. Then it all went to heck, and I’m still recovering from that body blow. There have been weeks when it’s been a close thing because of that. The promise of money temporarily took away my street hustle. I relaxed. Relax for too long and before you know it you’re in trouble.

Sir Tessa blogs up a storm with reviews of The New Weird (“This book should make a great hat. It has the right dimensions, deep and wide enough to keep good balance, and the cover and pages have a good consistency of flop.”) and Steampunk (“It’s kinda gross. I mean, sickening. Even as I was laughing at the utter outrageous random WTF of it, I was wondering if maybe I was going to be sick.”), as well as some thoughts on connectivity (“I have science fiction in my pocket”). Also from Silence Without a link to this rather hilarious scenario involving a complicated scheme to woo with time travel and knife cuts….

My review of Chuck P’s Pygmy gets picked up by the Miami Herald.

Larry brings us news of an upcoming book translated from the Spanish. (Is this a surprise?)

Bibliophile Stalker has officially become one of the best daily sources for links, many of them genre-related. UPDATE: And posted a good review of Best American Fantasy 2: “My honest reaction to the anthology is wow, I missed a lot of great stories from 2007.”

Hal Duncan’s follow-up to the whole ethics/reviewing/we’re all crazy includes these two posts. One of them is short.

I’d also note that China Mieville is guest-blogging on Omnivoracious this week. I’ll be introducing him and posting a bit on subjects like Alfred Kubin, which pertains to China’s latest novel. I’ve gotten a sneak peek at China’s entries and they’re highly hilarious and thought-provoking. Great stuff, so remember to check over there all week–and I’ll remind you, too. :)

Finally, Shared Worlds will be making some announcements of note on Wednesday. I’ll blog that here as well. 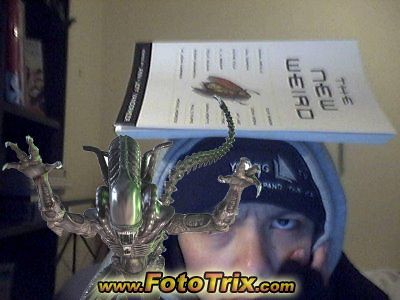 Oh, yes, and I found this really hilarious, if cheesy site. Obviously.

11 comments on “Links for a Lazy Sunday”