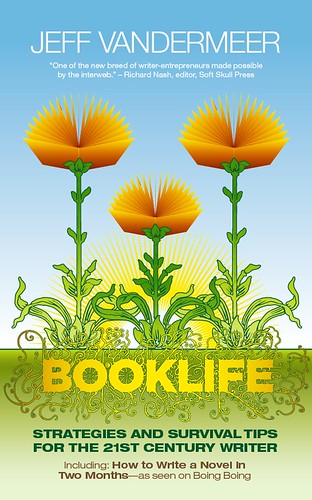 I’m busy on a dozen things this week–Last Drink Bird Head, Booklife ARCs, Shared Worlds business, fall book tour schedule, a book review for B&N, an antho proposal, and a book proposal–so bloggin’ will be light. But I thought I’d give you another Booklife excerpt today. I just got the PDF of John Coulthart’s layout, and this will be one writing book that doesn’t just have a functional and useful interior but also a beautiful one.

Oh, and advance blurbage is beginning to come in, like this one from Minister Faust: “Jeff VanderMeer’s Booklife is a frank, revealing, riveting manual by a writer for writers, not simply on how to be a better wordsmith, but on how to be a better human being. I’ll be recommending it to all my writing students. I don’t know how to praise a book more sincerely than that.”

How you combine [redacted as proprietary by Evil Monkey] to create leverage will be unique to your book, your personal commitment, your publisherâ€™s commitment, and the competition for attention in your area of emphasis, among other factors. Many writers choose to think tactically and use tools for leverage or use opportunities for leverage, but they donâ€™t create a strategic plan. Sometimes, this is because they are working in concert with their publicist, who creates the strategic plan. Other times, itâ€™s because the writer doesnâ€™t have the time to do more than be proactive in one area and reactive in most others.

What does this mean in real-world terms? Here are two scenarios based on real-world anecdotes.

Writer A has an event that draws one hundred people to a library in Minneapolis, Minnesota. The writer did a lot of the legwork and made sure that the people he knew who lived in the area got information about the event. The library itself handled getting a listing in the local papers and online guides. The writer sells thirty-five books at the event, blogs about her experience, and travels to the next gig.

Writer B has an event that draws twenty people to a bookstore in Asheville, North Carolina. She didnâ€™t do much legwork and relied on the fact the reading was part of a series that attracts a regular crowd. The bookstore managed to get not just a listing but a sidebar with her photograph in the local paper. She sells five copies, signs stock for the bookstore, manager, blogs about her experience, and travels to the next gig.

Which writer had the more valuable gig in terms of her career, Writer A or Writer B? On the face of it, Writer A had the more successful event. She sold more books. But the truth is more complex. For example, it would depend on knowing the details of the individual plans each writer had created for their book. Five books sold with a small feature in the local newspaper might mean more in terms of Writer Aâ€™s plan than thirty-five books and no feature might mean in terms of Writer Bâ€™s plan. Writer Bâ€™s blog audience might be much larger than Writer Aâ€™s blog audience. Writer Bâ€™s plan might have included inviting a writer from some national media outlet â€” and if that one person came, a gig that netted five copies sold might in time turn out to be much more valuable. Maybe Writer B also managed to get attention from a major news site because her plan specifically stated that she wouldnâ€™t do readings from her book but instead a unique presentation based on its subject matter that then would be videotaped and posted on YouTube.

Iâ€™ve raised a lot of hypotheticals in defense of Writer B only selling five books, but what Iâ€™m trying to do is make clear the value of planning in not only having a clear vision for your efforts but also a way of measuring your success.

Doing only what you can because of other commitments or because you donâ€™t want to do more are legitimate reasons for sticking to a largely tactical battle plan. You should not feel pressure to put yourself in situations that will result in failure.

However, if you decide to coordinate your efforts and look at them holistically, you should create actual planning documents.

…and then I go on to talk about the ideal high-level and detailed plans, etc., etc…

12 comments on “Booklife Excerpt for a Busy Wednesday”