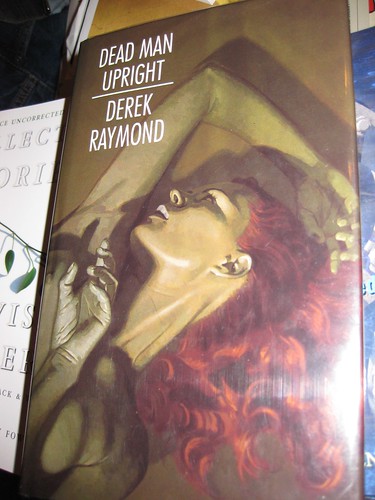 Click here for my thoughts on the first four Factory novels.

“Killers are like mushrooms; the deadly ones look like the ones you have for breakfast, unless you happen to have the sense to turn them over and look at the funny underneath.”

Dead Man Upright, the fifth and final volume of Derek Raymond’s Factory series is altogether a different beast than its precedessors. It inverts the structure and intent of most of the prior volumes by focusing more on the killer than the victims; in this respect, it most closely resembles The Devil’s Home on Leave, but with more variation and more interesting situations. Dead Man Upright also presumes a lot. There’s not much of our nameless detective’s personal life, mined to such effect in the other four novels, and as a result the killer assumes even more significance, especially for readers who haven’t encountered the other cases related by our Unexplained Deaths detective.

Several reviews of Raymond’s fiction indicate that Dead Man Upright is a dying fall after the fourth Factory novel, I Was Dora Suarez; in fact, it is a continuation with the preoccupations of that novel, sans the emotional involvement of the detective with the victim. In some ways, with Our Anti-Hero beyond love and absolved of the sorrow of his past if only by dint of its remoteness, Dead Man Upright is the most sober and sobering of the Factory novels. Although the change in emphasis may throw some readers, all of the Raymond strengths manifest herein: the great ear for dialogue and local color, the ability to animate the minds of victims and killer, and the edginess and conflict of the detective’s relationship with his superior.

There’s no getting around the fact that serial killers are mostly men and that their victims are mostly women, and that Derek Raymond is a male writer, and yet within that constraint Raymond manages in the novel to create astonishingly precise and individual portraits of the three or four victims he profiles. We don’t feel their victimhood so much as their fierce individuality, which feeds into the sense of the killer being a consumate actor. (That said, the question that came to mind is whether there is a need within noir to provide some antidote for this paradigm, much as Achebe’s Things Fall Apart provides the antidote to Conrad’s Heart of Darkness.)

Softening the harshness, the detective for once has actual friends in the novel, from his colleague Stevenson to the retired cops Ballard and Firth (who, in this case, serve as able replacements for the gutter-speak and flash of the rogues and villains that serve as bit actors in the other books). In this sense alone, then, Dead Man Upright seems more comfortable than intense: the detective has relaxed into his role within the Department of Unexplained Deaths; he seems at peace with the idea of living out his days there.

Once again, though, Raymond refuses to deal in TV cop hyperbole, as the mystery itself isn’t much of one–just like most real cases. Firth suspects his upstairs neighbor of being a serial killer, given a high turn-over among female visitors: six in eighteen months, each abruptly disappearing from the life of Ronald Jidney. The mystery is more in the many aliases Jidney uses, and the search for evidence to force his arrest, than in any ambiguity as to the identity of the killer. As in I Was Dora Suarez and The Devil’s Home on Leave, the police work mostly takes the form of mind-numbing (for the detectives) repetition of interrogation and research.

Where Dead Man Upright veers from the prior Factory novels is in its altered use of confessional, personal materials. Gone are the diaries and journals of the victims. Gone, too, as mentioned, much insight into the detective’s personal life. Instead, the reader gets the prolonged letters of Jidney and re-creations of his life. In a sense, the detective offers up his account of the case as a profile of Jidney, and in cataloguing the strange appeal of evil, banal or otherwise, manages to provide just as unique an experience as Thomas Harris’ The Silence of the Lambs. Here’s a representative selection from Jidney’s letters:

People never really go into the killer’s state of mind. They only think they do–I reckon it’s because they’re too frightened of what they might find buried in themselves if they really got in there. Frightened they couldn’t get out again. So they do it the easy way, waste their time trying to assess a killer by their own standards, it’s just childish, you can’t catch the moon in a butterfly net. They’re up against interchangeable man, the gregarious loner, the man with another man to go with him who’s got to be disguised as a normal man, because he’s not that abnormal that he wants to get caught. All those old prats you see at a safe distance on the box putting the moral point of view about murder, priests and so on, they ought to spend a night with me alone in a room. There’d be no violence–old men and bores don’t turn me on–but we could have a talk, and they’d be singing a very different tune in the morning…People ought to see a killer when he’s in between times–he’s as safe as a parked car! You could drink a pint with him, you could share a room with him!

Even in Harris’ novel, there’s an element of performance, of being on a stage, in Lecter’s grand escapes and flamboyant gestures. On some level, through both the novels and the movies, we’re made as observers find something to admire in Lecter, something we wish we had, almost as if he’s a rock star. There’s none of that in Dead Man Upright. There’s something more insidious and subversive: an attempt to make us understand Jidney, and by understanding Jidney see something common in his experience–something we all share, in some part of our reptile brains, but not something we want or admire. Raymond also makes no attempt to sugarcoat or dramatize the women’s deaths. Instead, the reader receives matter-of-fact depictions that seem so perfectly out of an actual case file that we both accept the details too readily and are repulsed by the sheer tired-sofa, worn kitchen-counter aspect of them (“…and when the blood’s dried on you go and lie down on the bed and pick the little crusts off”). The planning and execution of these slaughters also takes place in a conveniently familiar context, and thus attain a comfortable aspect even as they horrify us.

A killer wouldn’t mind being normal–he’s a hyena that would rather be just a man in an armchair, and he can give a good imitation of one, too. If he’s living with others he does his share of the housework and washing-up. Nine days out of ten he’s just someone walking up to the off-license for beer and cigarettes–people can’t seem to get it through their heads that even if a man’s a killer he’s still got to find a place to live, pay the rent, get a job, buy clothes, go out and get pissed; he feels up, he feels down the same as a normal john.

It’s hard to call “mesmerizing” a novel where the reader knows the answer to the mystery within a few chapters, but Dead Man Upright is indeed mesmerizing. The pathology of its characters brings us through to the end, and if it’s a dying fall, it’s one of great and piercing insight–and in no way a disappointment. The novel also gives the reader the satisfaction of seeing a much-loved character–a hard-won love for a detective whose means have often been suspect–reach at least a provisional truce with himself, a kind of self-acceptance that removes the image of agitation and anguish that marked him at the end of I Was Dora Suarez.

Still, by the denouement of Dead Man Upright, Raymond gives readers of the complete series the understanding that the past isn’t dead, that it still haunts and changes the person who has experienced it, as the detective writes: “All at once I am speeding after [my daughter], who is wobbling down our front path on her bike. Next week, she’ll be nine. I am rushing after her with my arms open and calling out: ‘I love you! I love you!’ But she is always just out of reach.”

This is how the dead live, and this is how Raymond–through a fierce, sad love–animates words on a page so that they bring us out and into the world, no matter how merciless or ultimately unknowable.