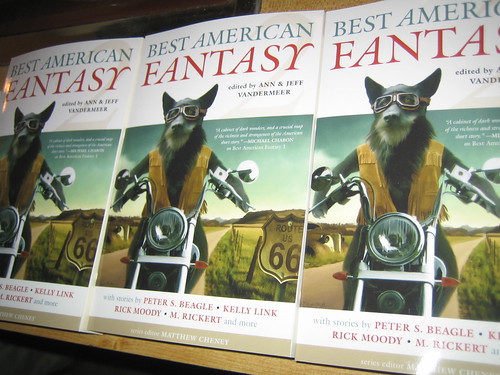 Effective immediately, the Best American Fantasy series is moving from Prime Books to Underland Press. Volume 3, guest-edited by Kevin Brockmeier (series editor Matthew Cheney), will be published by Underland in early 2010. The contents will be announced shortly. In another change, the year will be dropped from the title and each installment will just go by the volume number. This will allow for greater flexibility in scheduling.

Here’re the acknowledgments for volume 2:

Putting together a book of this sort is an immense endeavor. We
could not have done it without the help and support of many people, including John Joseph Adams, Michael Bergstein, Kate Bernheimer, Frederic Chabot, Connor Cochran, Eli Horowitz, John Klima, Tessa Kum, Holly MacArthur, Nicola Mason, Jonathan Strahan, Hannah Tinti, Gordon van Gelder, Derek White, Sheila Williams, and Renee Zuckerbrot. Thanks to Clayton Kroh for his invaluable editorial assistance. Special thanks to the many editors, publicists, writers, and staff members of various publications who have sent us material for consideration. We have tried to list information on everything we have received at the back of the book, and we encourage readers to support these publications.