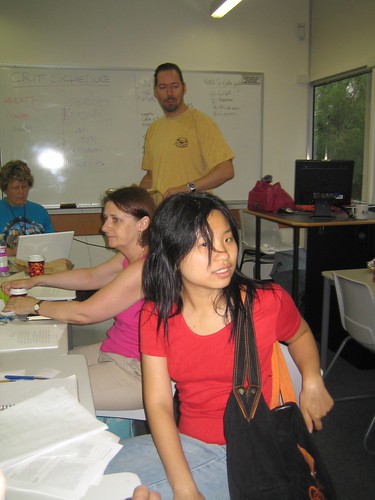 They say the first Clarion you teach is the one that breaks your heart and determines whether you’re cut out to do workshops of that nature. If that’s true, then Clarion East in 2007 was the crucible. But Clarion South 2009 was different for a couple of reasons: I taught solo, without Ann (felt at times incapacitated by that, although she critiqued stories from home), and it was the sixth week, not the second. Typically, the sixth week is a time of total exhaustion, combined with the dawning realization, in a kind of rising panic and relief, that it’ll all soon be over. (It can also be a time of manic energy, depending on how the fifth week went; in this case, Trent Jamieson had done a great job of challenging them and yet chilling them out, so they had a good amount of energy for my week.)

For an instructor it poses unique challenges: you want them all to run to the finish line, not walk, but you also want them to come out of the experience refreshed and energized. You want them to have exit strategies with which to engage the wider doesn’t-want-you-to-be-a-writer world. In addition, you want, I think, to stress that week six is not the be-all and end-all. Which is to say, there’s generally no magic revelation in week six, by which time most students will have dozens of conflicting opinions in their heads. Nor is a Clarion a direct A to B course from promise to realization of potential. It’s more of a start-stop lurch from which you emerge dazed and tired…only to reconcile all the information and put it to use starting a few months later. Which isn’t to say some students don’t have epiphanies at Clarions, but that it’s more useful to think of what you submit to the critique sessions as raw fodder for learning what you need to work on in a broader sense. If you wind up with a salvageable story, great, but that’s not really the point, as far as I’m concerned.

To underscore this, I gave them one of my own stories-in-progress on the first day, complete with my initial handwritten edits, and told them to send it around and critique the crap out of it. I thought this might make a couple of points: every writer wrestles with some of the same problems and issues in a story, no matter where you are in your career, and by making myself vulnerable to them perhaps they’d understand that my analysis of their work in the workshop was no more or less than what I subject myself to when critiquing my own stories. (Whether it served that purpose, I don’t know, but I sure did get a lot of great, useful comments on my story.) 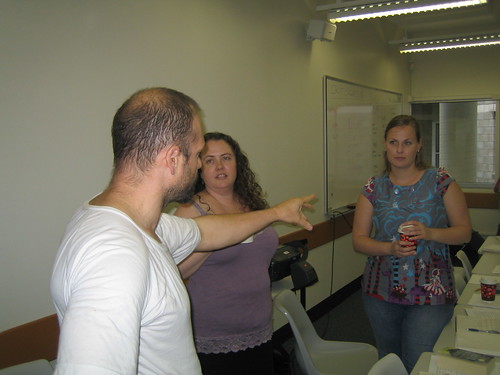 (Brendan, Suzanne, and Lisa talking over a point or maybe just planning lunch…)

But the other truth about a Clarion is that it’s about the students, not the instructor. This extends to what I call negative examples. Which is to say, I’m as happy if a student reacts against what I’m teaching as if they react favorably toward it–so long as they react, and in that reaction continue to define and refine their own identity as a writer. I even asked them to critique my reading, in the sense of “This is how I would want to present myself” or “This is not how I would want to present myself.” (I don’t know how the reading went from an audience point of view, but I was reading from Finch for the first time, and it felt good…it felt extraordinarily good.) As far as I’m concerned, each instructor provides an example of the conduct of a professional writer 24-7 while at a workshop. Everything is a potential positive or negative lesson.

This speaks to another idea: You cannot connect with every student at a workshop. Sometimes your communication style, even if you’re saying the same thing as another instructor, simply won’t mesh. Sometimes your aesthetic and career choices will be alien to a particular student–and even if you don’t rely on the anecdotal evidence gleaned from your own career, you may not be of as much use as another instructor. But that’s okay–and that’s why Clarion has six instructors. All you can do in your week is do your best to be honest and to teach toward the majority of the students in any given setting, and then try in the individual sessions to custom-fit to the others. 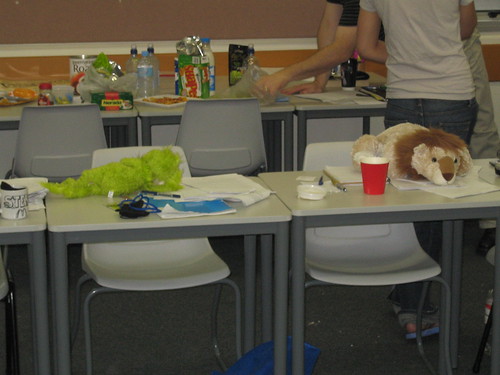 (Two of the mascots.)

As for structure, the basic idea of Clarion South, like any Clarion, is to have a morning critique session of student work submitted the day before, followed by teacher-student individual sessions. Evenings are reserved for reading stories for the next day and hanging out with the students in more relaxed social settings. I like to start each day with a short writing exercise or lecture. Although I usually lecture about aspects of creative writing, this time I taught mostly from Booklife, since many of the strategies therein apply to the students’ re-entry into the “real” world. Because of this, I did most of my instruction about creative writing by taking an element or theme of a critiqued story and doing mini-lectures within the critique context. For example, talking about the different threads of information “style” must simultaneously convey, or the elements common to a good sex scene–always trying to make it clear that in giving this practical advice they would always come across exceptions.

Of course, sometimes no matter how structured you are, the students will be one step ahead of you. I basically got off the plane after a tense book deadline, wrote out all my bullet points on the board, and then sat down to be confronted by sock puppets giving the first story critiques. This was utterly and amazingly creative and funny, but to my jetlagged brain it was the last straw. Especially since Clarion South has a little thing called “ditto/anti-ditto,” which allows each student while another is critiquing to more or less whisper agreement or disagreement. But I didn’t know it would be deployed that way, so in addition to the sock puppets, I was hearing this surreal hushed “ditto/anti-ditto” that sounded to me almost like some bizarre version of a Gregorian chant. So I sat there for about a minute thinking, “I know my brain is going to reset. I know it is.” I think this reaction probably was more priceless than if I’d laughed outloud. 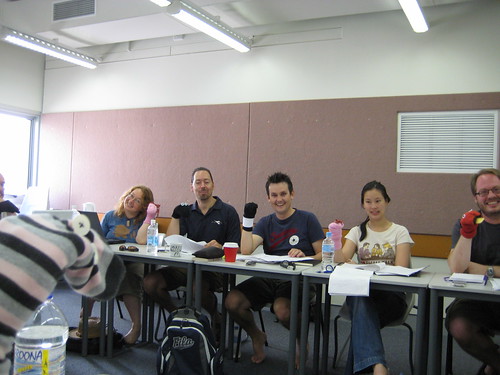 The students were, quite frankly, a delight to teach. They were, almost to a fault, receptive and open to new ideas. They were nice, which is always a plus, but not nice in a puppy dogs/bunny rabbits way (which is also good). They generally kept focused and seemed to care not just about each other, but about each other’s writing. I became very fond of each of them–genuinely moved to a secret joy by many–and had to make sure to not let down my guard until the party Friday night, when I was no longer their instructor but just this demented shipwrecked sea-captainy-looking guy who was trying to convince student Tracy that his sock puppet would drink half of a margarita if she’d drink the other half…

By then, I have to admit I was a little frazzled. I’d turned in three books in 18 months, written 350,000 words in that period, if not more, and pushed myself to a limit that had me scared I was about to lose my ability to recharge my imagination. It was good to just have a few drinks, joke around, and observe all of these strong, idiosyncratic people who’d been strangers to one another just six weeks before. People who’d given me back a lot of energy, because the other secret about any workshop like Clarion is that you learn as much from the students as they learn from you.

Here’s a list of the students who attended Clarion South 2009, with links to websites, blogs, and livejournals where applicable.

The other instructors were: Sean Williams, Margo Lanagan, Jack Dann, and Trent Jamieson.

Thanks to Clarion South for being so well-organized–kudos for that has to go to founders Kate Eltham and Robert Hoge, as well as the two aides in the classroom at all times, Heather and Robert. Thanks to all four of them, because throughout the entire experience I didn’t have to worry about anything administrative in nature. Thanks also to the student dorms that cooked dinners for me–a great idea, since it gave me an opportunity to learn more about the students in smaller groups, and not always talking about writing. (Thanks, finally, to Gavin and Kelly, who were there in spirit.) 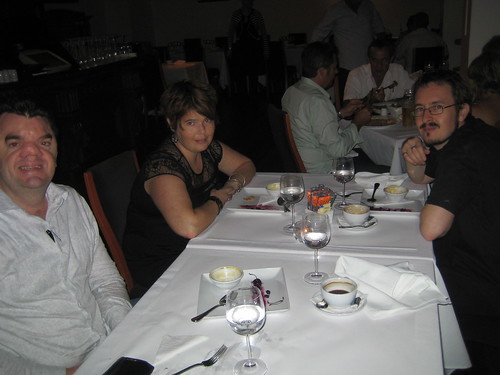 (Co-founder of Clarion South, Robert Hoge, along with Diana Jamieson and Trent Jamieson, week 5 instructor, at The Lab, before Clarion South.)