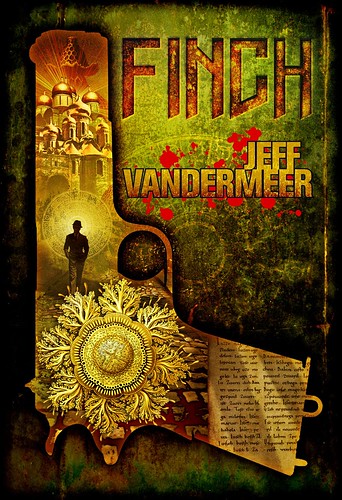 A blunt sharp shock to the system…

Cover: By the amazing John Coulthart. For a larger version, click here. An interesting fact–John tells me the cobblestones in the picture are from a photo he took while we were walking through Paris together; er, sans blood. (This design is semi-final, in that a blurb will probably occupy the space under my name.)

Description: A noir thriller/visionary fantasy set in the failed state of Ambergris, 100 years after Shriek: An Afterword. The gray caps, mysterious underground inhabitants, have re-conquered Ambergris and put the city under martial law, disbanding House Hoegbotton, and controlling the human inhabitants with strange addictive drugs, internment in camps, and random acts of terror. The rebel resistance is scattered, and the gray caps are using human labor to build two strange towers. Against this backdrop, John Finch, who lives alone with a cat and a lizard, must solve an impossible double murder for his gray cap masters while trying to make contact with the rebels.

Nothing is as it seems as Finch and his disintegrating partner Wyte negotiate their way through a landscape of spies, rebels, and deception. Trapped by his job and the city, Finch is about to come face to face with a series of mysteries that will change him and Ambergris forever.

The cat and the lizard watch intently. Something is about to happen. And they both want to know: who is Finch, really?

45 comments on “Finch: Third Book in the Ambergris Cycle”