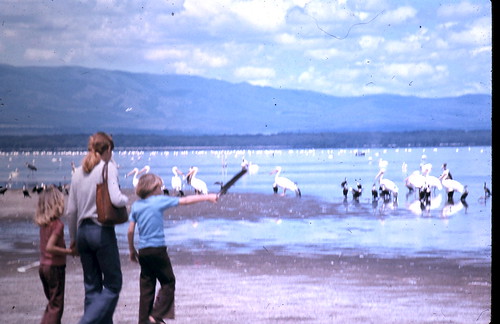 When I was four, our family joined the Peace Corps and moved to the Fiji Islands for two tours of duty. My father taught chemistry at the University of the South Pacific and my mom did biological illustrations for various departments and other clients. In between tours, we took an extensive trip to Peru and other countries. After the second tour, our parents took my sister Elizabeth and me on an amazing adventure: about six months traveling the world before returning to the United States. We traveled from Fiji to, among others, Thailand, Singapore, Malaysia, India, and then places like Kenya and Egypt and parts of Europe. We stayed in hostels, hotels, motels. We traveled by plane, train, bus, and car. We saw trance dances and shadow puppets in Indonesia. I was bitten by a monkey in the Calcutta zoo and ate American-style pancakes in Kathmandu.

In short, it was an eye-opening experience–the kind of thing that led to me becoming a writer, and especially a fantasy writer. As Jay Lake and I have discussed, it seems there is a certain kind of writer who tries to reconcile a childhood of moving from place to place by writing fantasy–a way of combining elements of all the places visited or lived in. (And also because, frankly, if you’re exposed to the world in its entirety as a kid, it’s a strange and fantastical place.)

Perhaps as importantly, when you travel a lot overseas, you lose your ties with your extended family even as you gain exposure to many cultures and people. My parents took photographs the entire time my sister and I were growing up–both in Pennsylvania and overseas. They’re in the form of slides, which I’ve only just this week–thanks to Ann buying me a slide converter–gotten around to beginning to convert into digital form. In many cases, these slides are my only memory of early events in my life. Sometimes they are my own memory of family members. At times, I am unsure whether I actually remember something or I am just remembering the photograph of it.

Over the next few months, I’ve decided to digitize all of these slides and to share some of them on this blog. For someone with no fixed sense of place, no fixed sense of family (until I encountered Ann’s wonderful extended family), this has become very important to me. I can’t promise anything profound, but you’ll always have the option to just skip the post. But I want to start getting a few things down on paper, to fix my memories in a kind of record. For now, here are a few photos from my initial scans, with a couple of comments. Again, thanks for your patience with this indulgence–and apologies for the poor quality of these initial photographs. I’m still learning how to operate the scanner. 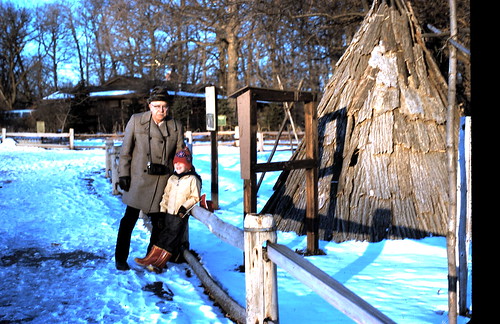 My grandfather and me in 1973, during a trip to Chicago. My grandfather was one of the nicest people I’ve ever known–gentle and kind. He smelled of old cigar smoke and, sometimes, faintly of cologne. If he wasnâ€™t reading, heâ€™d be cutting his fingernails. My grandfather had yellow moons for fingernails. They always grew long and he always cut them with a shiny pocket knife he carried in his pants pocket. He looked as though he were cutting off the rind of a cheese. While he was doing this, heâ€™d tell me stories. Sometimes, when he was in a mood, heâ€™d sharpen them to little daggers first. And his eyes would spark. And sometimes the light would catch his fingernails as he cut them and turn them a luminous whiteâ€”and it would seem like his essence was pouring out of his fingertips. I don’t know why this is my most vivid memory of him. 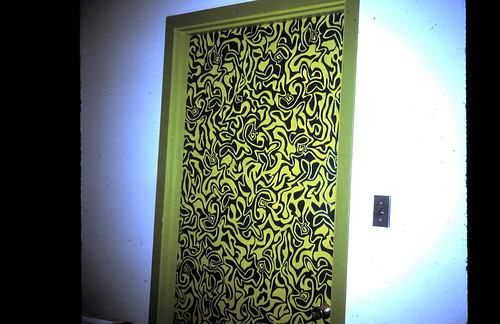 A door my mom Penelope made for Dr. Olafson at State College, Pennsylvania, in the late 1960s. This door I remember only from seeing the slide, but it has remained so vivid that when writing Finch I had this door in mind as an example of something infiltrated by fungus. 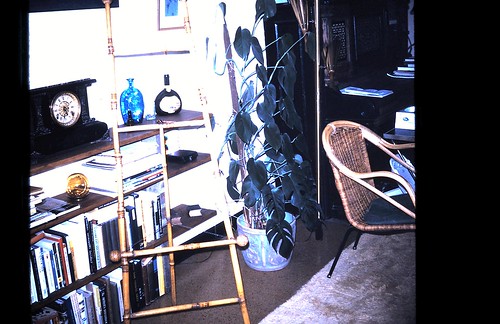 The family living room at State College, PA, in 1969. Some of this furniture, taken out of storage after Fiji, followed us to Ithaca, New York, and then Gainesville, Florida. Lots of wicker, I remember… 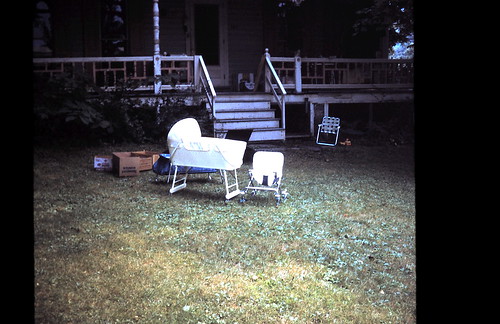 Oddly enough, this is some kind of yard sale in Pennsylvania, before we moved to Fiji. I guess we were getting rid of stuff we didn’t need any more. 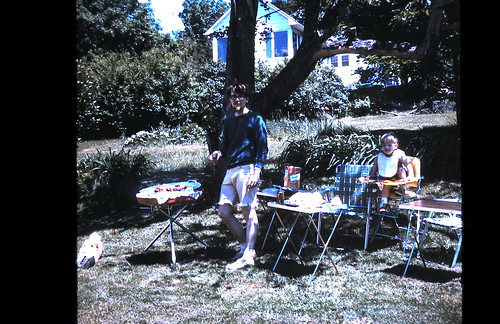 A backyard cook-out in 1970. That’s my dad and me. Again, I remember those chairs in Gainesville, Florida, thread-bare and falling apart. In the 1980s. Apparently, we believed in using up whatever we had… 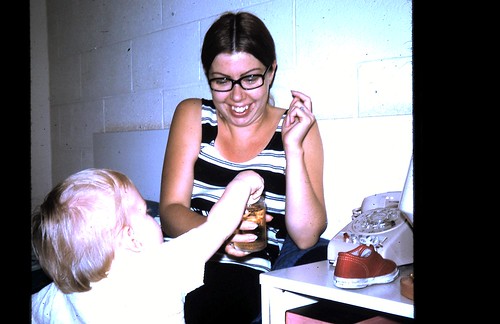 My mom and me in a motel, with dad taking the photo. Probably around 1970. My mom was always a pretty high-strung artist type as a parent. My dad was always calculating and scientific. I find I veer between those two extremes, usually in balance. 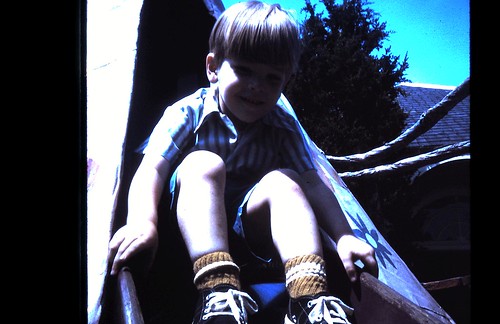 Me on a slide in Hershey, PA. 1971, so I would’ve been about four years old. I vaguely remember visiting Hershey, because of the chocolate. 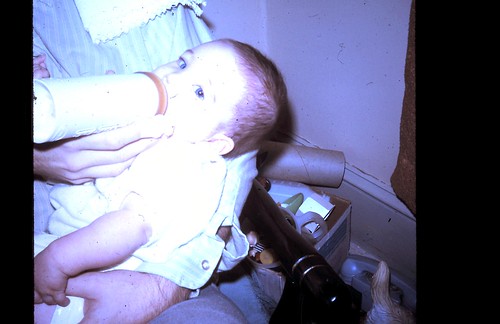 My sister Elizabeth, only a few months old. We were peas in a pod in Fiji. Both had stamp and rock collections. Both weren’t fond of cane rats running across the living room floor… 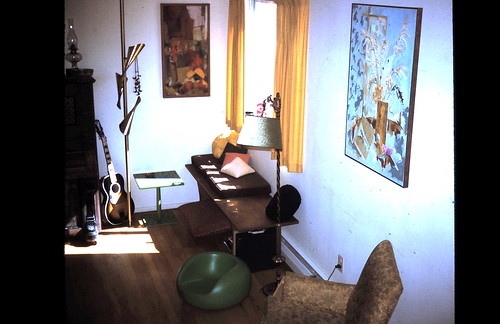 Another livingroom shot, State College, 1971. The guitar was, I believe, my dad’s–he was, early on, always trying out various artistic endeavors. Also sculpture and painting. Later, in Gainesville, he and I built a lot of the furniture for the house. Or at least a few pieces. They were always sturdy, but lacking in any aesthetic charm. In fact, they were always ugly, if functional. 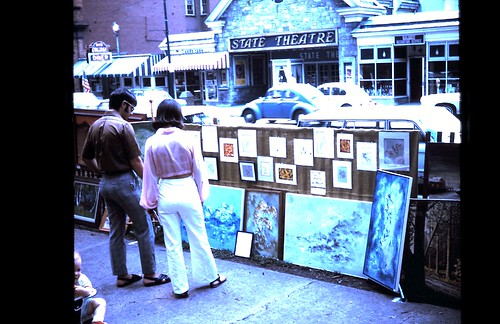 My mom’s sidewalk show during an art event at State College, 1969. The colors aren’t right in this digitized version of the photo. As far back as I can remember as a child, there was an art studio in whatever house or apartment we lived in–the smell of paints, curled up canvas, unframed paintings. All of this experience figured prominently in the sensory experience of the artists in Ambergris. 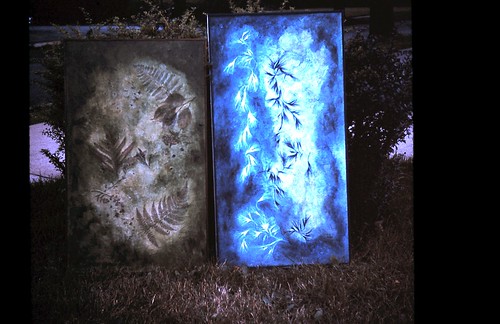 Again, these colors are awful in light of the original, but these are two early examples of mom’s art. 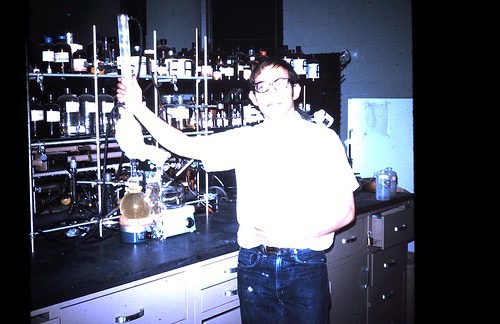 Hal, one of dad’s friends, in the Penn State chemistry department, 1969. 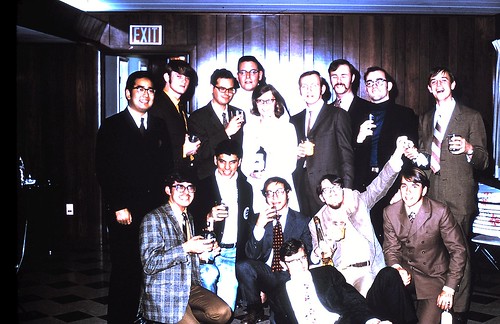 I believe that this is a group photo, from 1969, of the grad students in the Penn State chemistry department–I think that’s my dad kneeling in the front with his left arm up, but the photo quality is pretty bad so I’m not sure. 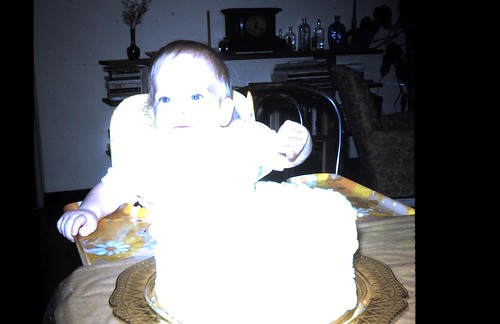 I really have to work on the contrast while scanning these slides, but this is me at my first birthday.

Just as a teaser, a few photographs from later, traveling around the world. First one is me, my sister, and my mom in Kathmandu, then two of Malaysia (one of them the Batu Caves–we’re on the left), and then the last one is us in Kenya in 1977, around Lake Tanganyika I believe. I remember the world trips very vividly, some of it from photos, but much of it from memory. I definitely remember the storks at Lake Tanganyika. I also remember things like being charged by wild buffalo in a park in Kenya. A merchant in Egypt marveling at our golden hair, getting separated from mom and dad in Rome and running through the streets, and all kinds of other things. More on all of that in other installments. 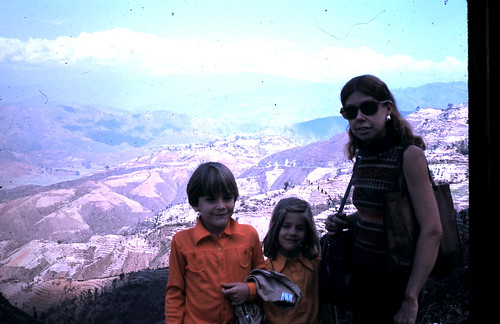 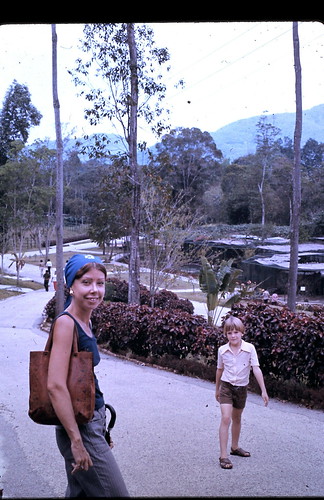 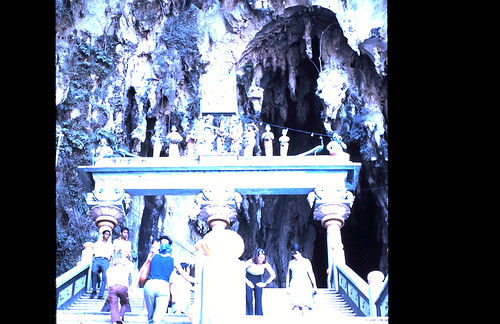 18 comments on “Reclaiming the Past: Old Photos”