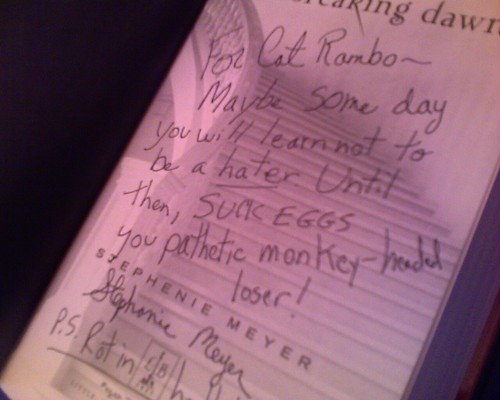 (Evidence of me wrongly messing with my guest bloggers–sending Cat Rambo, anonymously, a copy of Twilight with a special inscription after her post about the books. Followed by her initial response and my frantic emails to say it was a joke, which led to this. I still feel somewhat guilty – Jeff)

As promised, here’s a short summary of the guest blogging from June through early December, while I was working on the novel and traveling. In the interests of not driving myself crazy, I’ve picked my favorite post from each week and linked to them below. In some cases, I’ve chosen a second one I thought didn’t get enough attention the first time around. You can easily check out other posts from a particular week by accessing the archive.

In putting this post together, I felt a sense of intense pride about Ecstatic Days playing host to so many wonderful and interesting voices. A heartfelt thanks to each and every one of you.

In blogging order, then, I give you:

Jack O’Connell – On the Significance of Notebooks

FÃ¡bio Fernandes – On Being the other

Catherynne M. Valente – How to Write a Novel in 30 Days

Ekaterina Sedia – What Makes You Stop Reading a Review?

Horia Ursu – The Truth About Me and Other Memories

Sir Tessa – The Pirate/Ninja Scripts (this is a link to the first page of posts, scroll down, because you need to follow them in order)

Will Hindmarch – The Thing About Zombies

Cherie Priest – Everyone Else Is Doing It

6 comments on “Guest Blogging in Review: From O’Connell to Bradford”