I believe the record will reflect that I dearly love dirigibles — and have loved them for longer than they’ve been a fixture of a certain branch of speculative fiction.Â  Submitted by way of example, this partial scan of a piece of paper I found sleeved and preserved at a vintage paper goods store: 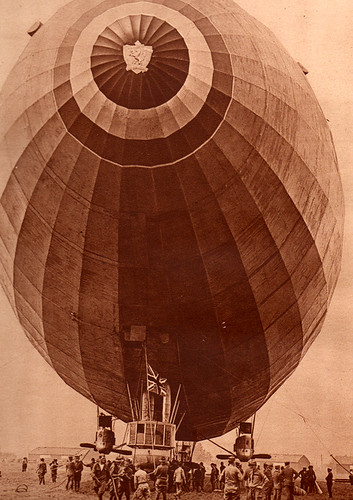 This lovely image came from the supplemental to the New Yorker in 1922. The headliner text, which is regrettably cut off from this image due to the inadequate size of my scanner, reads thusly: “R34, the First Dirigible to Cross the Atlantic. Bullet prow of the R-34, which created a sensation in 1919 when it crossed the Atlantic from Scotland to the United States, covering a distance of 3,200 miles.Â  The time consumed was only a few minutes more than 108 hours.Â  The crew met with bad weather, including at one point a fifty-mile gale, and the crew were in danger of exhaustion in the struggle with the storms in the cruise from the old to the new world.”

Yes, it’s just a page from an oversized magazine, but it charms me.Â  I had to climb over a toddler eating ice cream, stare down a seeing eye dog, and plunk down twenty bucks to take it home — but I did it, and I did it with joy.Â  That’s how much I loved it, and one of these days I’m going to get it properly framed.

So naturally, when I began to formulate my steampunk world setting for The Clockwork Century, I was forced to investigate dirigibles and their wimpier cousins, the people-moving balloons in use during the 19th century.Â  And naturally, this required some research, because when I started this series you could’ve fit what I knew about hot air balloons into the pit of an olive.Â  So thank heavens for random coups of synchronicity, for now I must give mad props to War of the Aeronauts: A History of Ballooning in the Civil War — a copy of which I found on a back shelf in a used book store.Â  Yes, well.Â  Sometimes the Research Methods of Bibliography gods are with me, and sometimes the Lucky Bitch fairies are along for the ride.

But I digress.*Â  A more recent shot of dirigible hilarity was spawned by the lovely and talented Meredith Yayanos, following a LOLCAT-worthy typo.Â  Ergo, I give you — via the exceptional magazine COILHOUSE — the wild and wonderful world of DRGBLZ.Â  And I ain’t gonna lie. There’s some silly stuff beneath that-there link, so be prepared.

While I’m on the subject, if you aren’t reading COILHOUSE you really ought to be.Â  The self-described “love-letter to alternative culture” is chock full of strange beauty, weird technology, social awareness, cheerful fandom, and good humor.Â  It’s available both online and in print (as of rather recently), and if you’d like to get your hands on the Too Naughty for Barnes & Noble limited edition of Issue #1, you could do so right here.Â  Issue #2 will be out by the end of the year.

* I suppose. It’s not as if I had a clear direction for this entry in the first place, other than, “Ooh, I really like the big rounded flying jobbies!”

3 comments on “Everyone else is doing it”