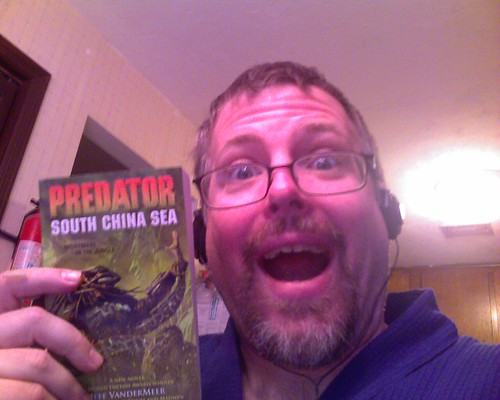 (Is it truly possible to look goofy posing with a macho Predator novel? Er, perhaps…)

should be in bookstores roughly sometime this coming week, along with Brian Evenson’s Aliens: No Exit

I’ve got a couple of copies in hand now and it’s a really handsome volume. I’m pretty pleased with it. Not to mention, it led to a book deal with Tachyon for Booklife: Strategies and Survival Tips for 21st Century Writers (2009) because of this post.

Thanks again to everyone who helped with this novel. As always any errors are my own, but thanks to Dave Larsen (weapons info), Ekaterina Sedia (Russian info), K.J. Bishop (seedy parts of Bangkok), and Horia Ursu (Romania info). Also thanks to my first readers: my wife Ann, Desirina Boskovich, Clare Dudman, Jukka Halme, Tessa Kum, David Lynton, David Moles, Cat Rambo, Mark Berntsen, and Jonathan K. Stephens. Also thanks to those who inspired aspects of certain characters in the book: John Gustat, Tessa Kum, Ben Peek, Horia Ursu, and, er, a rock star who will remain unnamed. HUGE thanks to editors Victoria Blake and Rob Simpson.

But that’s not all! After the cut, read about further Predator goodness…or badness…in the form of foreign and limited editions! (Next weekend: who would star in the movie, and the best taglines from the novel.)

Less than a month from now, Millennium Press will release a Romanian edition of the novel: 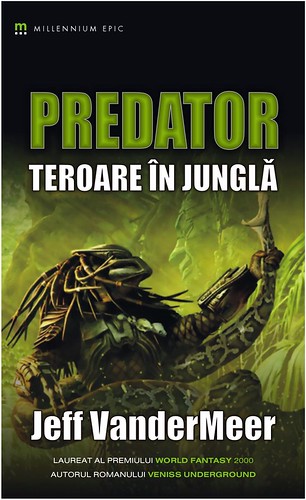 And “Dutch” Publications plans on releasing a limited edition of the novel, with a cover by John Coulthart. This version will include a vial of space viruses, a discarded Predator claw, some green blood, a humidifier that spews out Pred home-world atmosphere, your own blinking black box guaranteed to draw in aliens from all over the galaxy, and a whole bucket of mud so you can survive a Predator attack by slathering it all over yourself to disguise your heat signal. Here’s the link. Enjoy! 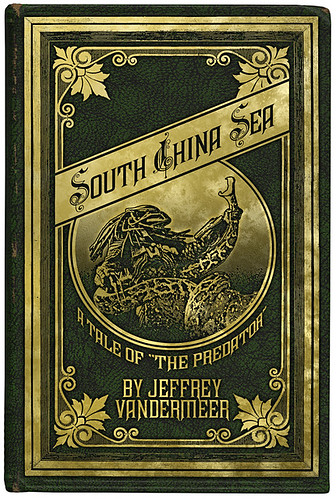 Finally, in re-reading the novel in book form, I would urge readers to cross out (or excise from their brains) all of paragraph 2 on page 106 beginning from “Tau and Colquhoun…” A continuity error crept in there. Similarly, Ary is driving the jeep all throughout page 99…Otherwise, it looks clean. My apologies for these errors.