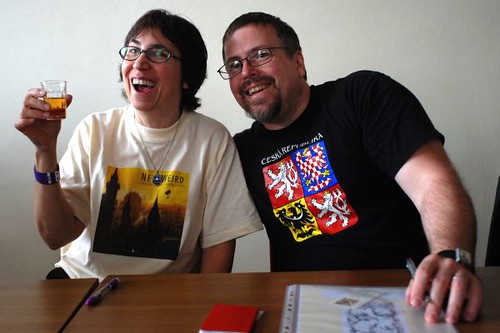 (Unexpected drinking at 11am, when given Captain Morgan’s by someone called “The Shaman”; photo by Richard KlÃ­Ã¨nÃ­k)

Note: Some photos in this post may disturb those who prefer less transparency from their authors. However, they have been posted to avoid any blackmail possibilities in the future…

As some of you may have noticed, Ann and I are fans of beer. Since this can have very expected consequences, I must confess to being premeditating when we went to Europe. I must confess to having a plan. Why? In the guide book, we read that Czechs average drinking at least one beer a day. Further, we were going as guests of honor to a convention, Parcon, held in a city called Plzen, the home of Pilsner-Urquell beer, with a Pub where you can pour your own beer and which even has a beer bath forty-five minutes away! (More on that below.)

So there was a plan, which was simply this: any time we drank beer, we tried to limit consumption of food other than meat and vegetables. and every morning, rain or shine, hungover or not, do a hundred each of push-ups, bridges, lunges, and crunches. Then, our last three days, R & R in Prague, walk everywhere, up inclines, to earn additional beer. The goal was simply this: contain bloating, fewer hangovers (and, frankly, we didn’t really have any hangovers). And have a lot of fun. And lo! It…worked? Who knows, especially since it seems perverse to exercise for the purpose of drinking beer, but we did enjoy the hell out of ourselves without feeling bad about it. (Hal: “Stupid overthinking Americans.”)

So here, without further preamble, some thoughts on our drinking, in the context of, no, we are not alcoholics. But we do enjoy a good brew. Or wine. (Here’s a whole set of photos about the beer, food, etc and a guide to Czech beers.)

One highlight of Plzen was a place called The Pub. Our first afternoon in Plzen we ran into the awesome Finns and their Slovakian handler while exploring the city center and accompanied them to this promised land. You sit at a table with your own taps and you pour your own draft beer…that comes from a pipeline right from the brewery a few hundred yards away. Fresh from that day so unpasteurized, with no additives. It tasted unbelievably pure–you could suddenly see how people could drink beer instead of water back in the day. We drank a decent amount and had no hangover possibly because of the freshness and purity. Also, you â€œcompeteâ€ with other Pubs all over the Czech Republic. And with other tables in your pub. The results are posted by the minute on big electronic scoreboards on the side walls. You pay by the .01 liter. It was, what’s the word, craaaaaaaaazy. And wonderful. (And much more civilized than the brochure for the Pub Crawl, which included the following bullet points of “perks”, including “Free smiles,” “Free surprise drink lottery ticket,” and “Free condom.”) 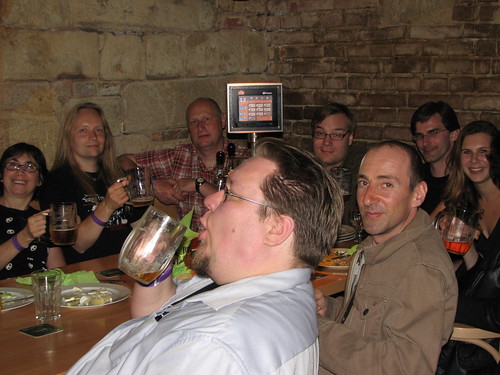 (As Tero labeled this photograph, “the American-Finnish-British-Italian-French-Czech-Scottish beer drinking team”. That’s NW contributor Alistair Rennie near the front, staring into the camera, who took a long train ride from Italy to get there, but seemed well-satisfied…)

For months Martin Sust had been alluding to a “beer bath,” which had elicited some reluctance and confusion from us–and apparently others, because Martin then sent us a link to the beer bath site. Ah–it was like a spa. With beer. At the Chodovar breweries. Okay. So, the last day in Plzen we were taken by car to the spa. Here we are prior to the beer bath, a little nervous. (Except for Hal, who said he’d brought a straw. “What a waste of beer.”) 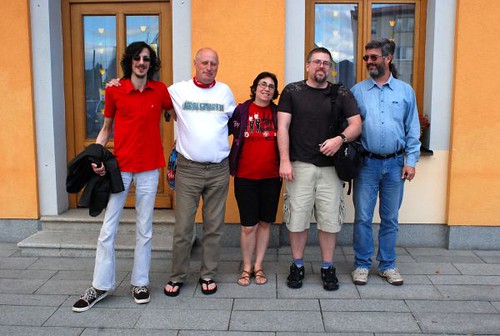 The nervousness increased as we learned the bathing suits we’d been told to bring wouldn’t be necessary, AND the photographer followed us into the bath and took pictures of us in our toga-towels… 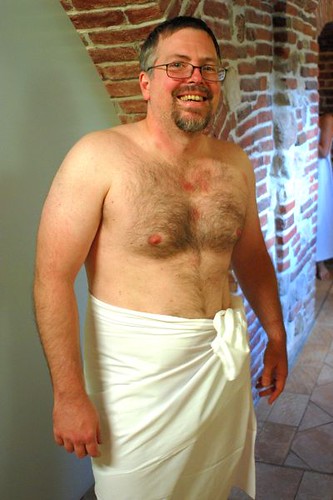 Ha ha ha. I’m standing here in a sheet. How funny. But not funny ha ha. Avert thy eyes.

So then we were led by professionals to our separate tubs, with closed curtains, and we got into the beer tubs…and it was lovely. Quite amazingly relaxing. Hal saying from behind his curtain, “This is heaven. This place is heaven.” Er, except for when the photographer was still snapping shots whilst subjects of the lens were trying to arrange bubbles strategically… 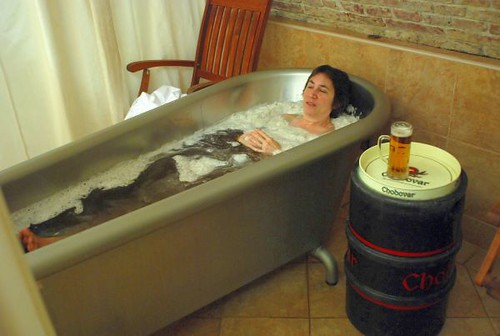 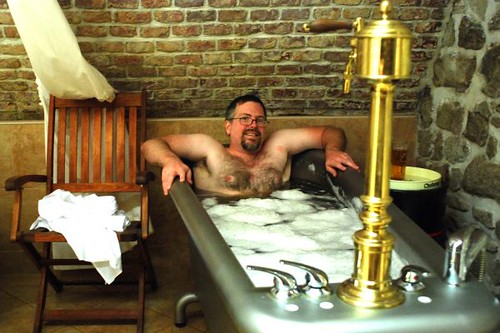 Go away. Please go away.

This constitutes, I think, as much transparency I as an author and the Internet as a civilized community, can take. This is the very cusp… Anyway, the aftermath was also very relaxing: being wrapped in heavy blankets afterwards and left to lazily fall into a half-doze. After which, we all had a very satisfying meal. So, thanks, Parcon, for the beer bath. It was, in the end, a very nice gesture and appreciated. 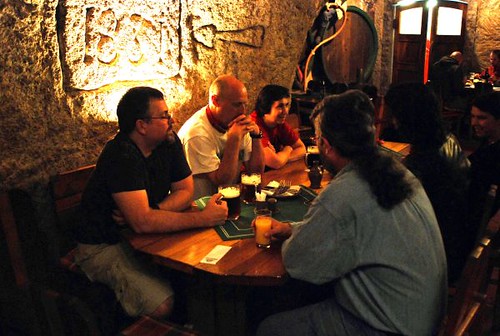 In addition to Pilsner-Urquell, which is a great lighter beer (especially on tap), we tried a variety of Czech beers. Including the great “field trip” mentioned above, to the Chodovar brewery. The Chodovar beers were thick and somewhat sweet, but not in a bad way. 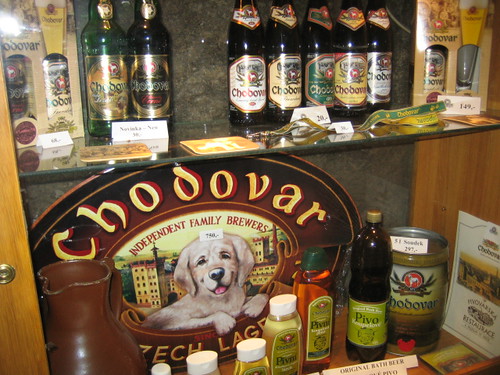 They had their own cave-pub, which was absolutely charming: cool and dark and atmospheric, with good traditional Czech food. While there I tried a mix of their dark and light beers, which was perfect for me. The taste was rich, with no bitterness. I liked it quite a bit. 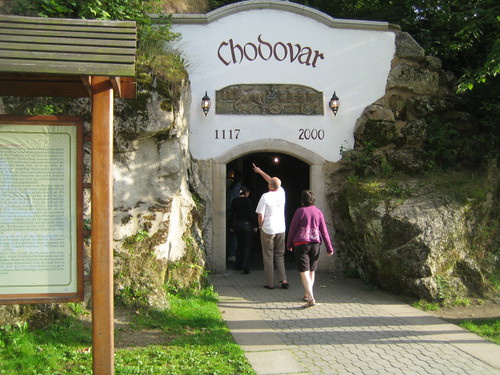 Also while in Plzen we ate at a restaurant where they had a beer called Master. Both the amber (or semi-dark) and the dark were excellent, but the amber was perhaps the best Czech beer I had while in Europe. It reminded me somewhat of certain types of Leffe, but had its own distinctive and refreshing taste. I could’ve drunk this beer all day. It had no after taste and the flavor was complex and ever-changing. There was definitely a sweetness to it, but with some bite. This beer is only served in select restaurants around the Czech republic, if I’m reading the site correctly.

In Prague, sitting in a relaxing river-side garden restaurant (part of the Archibald Hotel) on the far bank, looking back toward the old town, Ann and I tried Kozel beer. 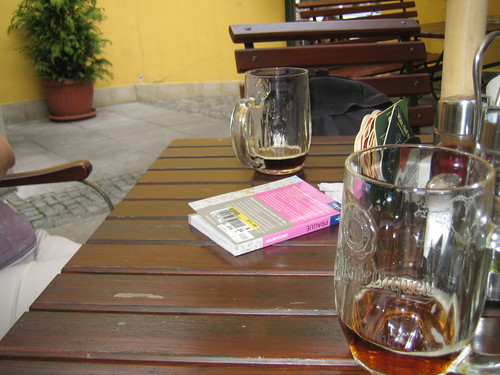 Ann got the dark, and I got a mix of the dark and the light. This was another really great beer, enhanced also by a tremendous cheese plate and the ambience of the location. It had a slightly more hoppy taste, again with little bitterness.

We also tried a dark beer called Krucevice while in Prague. I think both Ann and I found it to be a competent beer, but not the best we’ve had in that it was similar to other, superior Belgian brews. 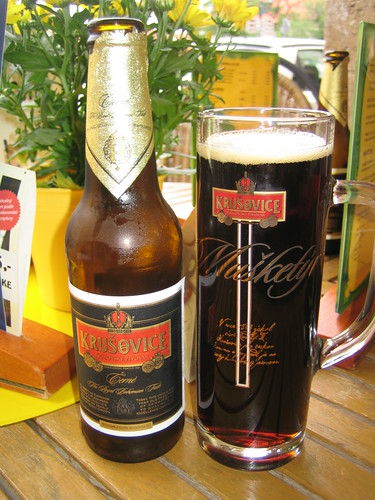 Sometimes, the richness of the location contributed to the beer experience. For example, we had Pilsner-Urquell at the swank Hanavsky Pavilion in the hills overlooking Prague, and, with another great cheese plate, it was one of our more relaxing experience. (If stupidly expensive.) 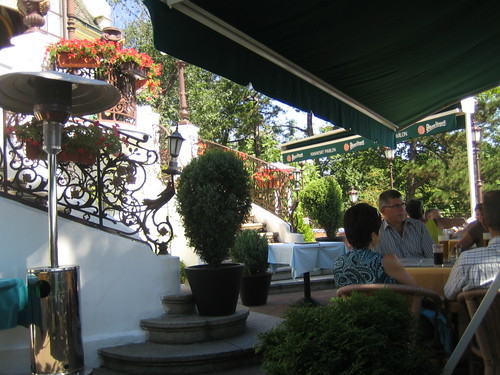 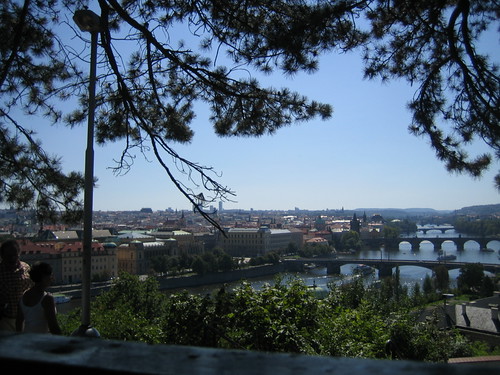 But low-key and hidden also has its charms. Our last day in Prague, we walked up to the main palace and through to Svankmajer’s gallery, before turning north and walking through the parks near the Hradcany area. From there we made our way past the stadium up to the Stromovka Park–a massive wilderness area that also hosts concerts. Back in 2006–see the end of this little video–we’d found this little hole-in-the-wall buried in the park and wondered if it would still be there. And it was. 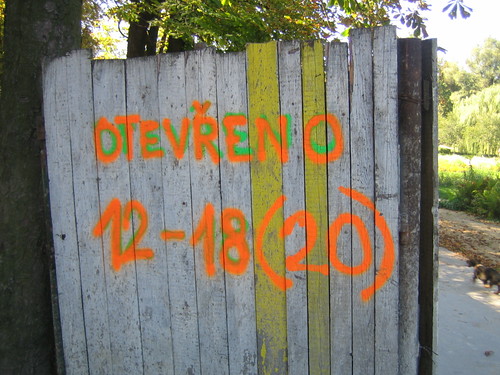 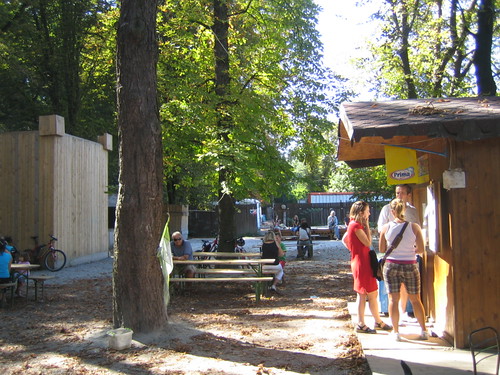 We don’t even know what the beer was we had, but it was nice to sit there and know we weren’t in a tourist location–everyone frequenting this place was Czech, and it felt like you had to know the neighborhood to find it (unless, like us, we’d chanced upon it, like we did in 2006).

Then, of course, there were other temptations while in the Czech Republic, like foreign beer, which we successfully fended off… 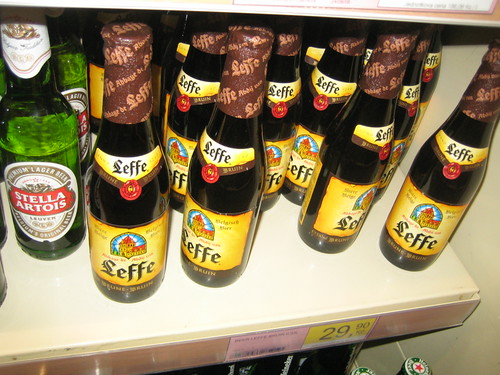 In addition, we had a couple of bottles of Moravian wine while in Prague. This one was a little slight… 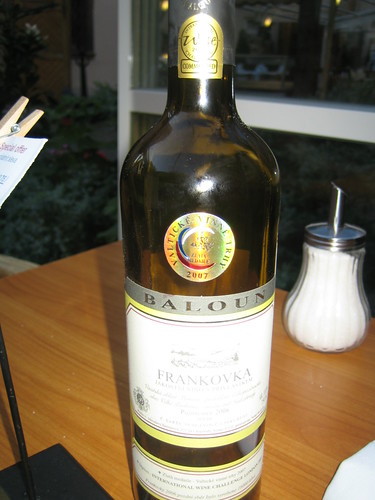 …but this cab was a great wine, starting out dry and thin in the mouth, and then opening up with wonderful flavor and texture. 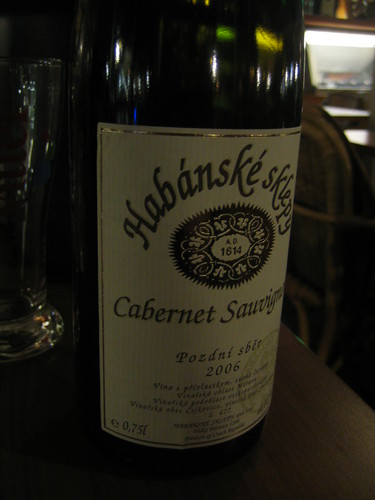 One final comment on our experience in the Czech Republic: the Metamorphis Hotel and restaurant were marvelous. Just first-rate. I can’t recommend it highly enough. Here are a couple of shots of our room, on the top floor, in a loft, with a window looking out on the famous tower right before the clock square. 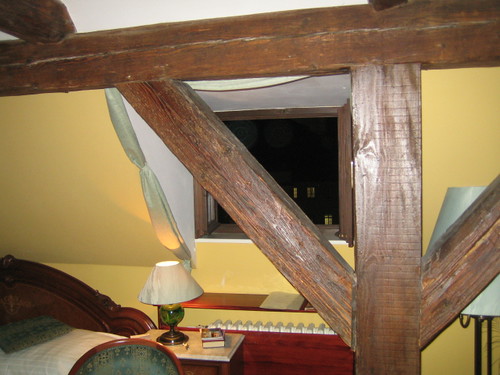 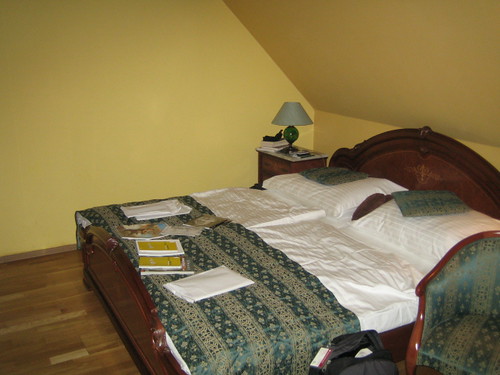 The other hotel we stayed at, the old town Hilton, featured The Maze, a somewhat pretentious Gordon Ramsey restaurant. This point was driven home in, to me, hilarious fashion when at breakfast with Abigail Nussbaum, an Israeli jew, both my wife (also jewish) and Abigail ordered the French Toast, only to be served postage-stamp-sized toast with huge slabs of bacon imprinted on it. (The twinned look of surprise was a unique moment.) But, on balance, we enjoyed it, especially because of a lovely meal the first night when, too tired to go out (and, frankly, baffled by the Maze’s menu in the lobby), we ordered from room service. 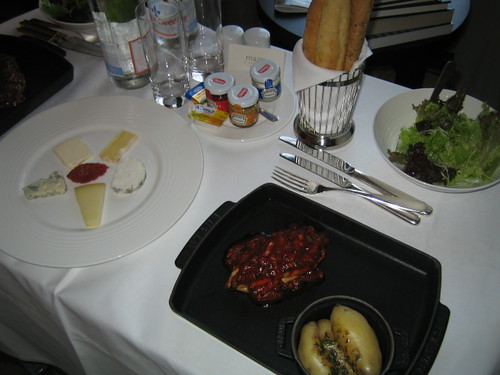 In Romania, by contrast, we tried only two types of beer: Ursu, a serviceable light beer, and Silva, a great dark beer that we remembered fondly from our last trip. It’s got a little bit of chocolate taste to it, but not enough to be annoying, so just this side of being a porter. 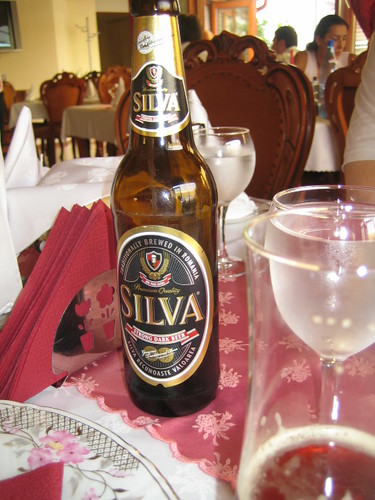 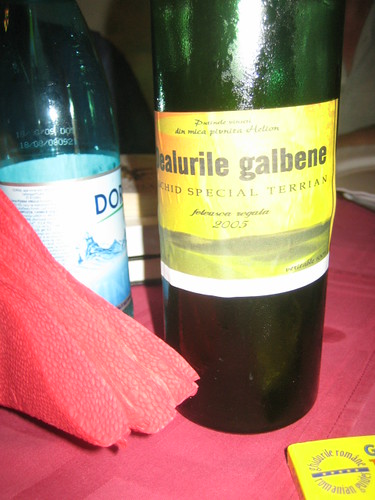 And we never figured out what this stuff was, but it was both smooth and deadly: 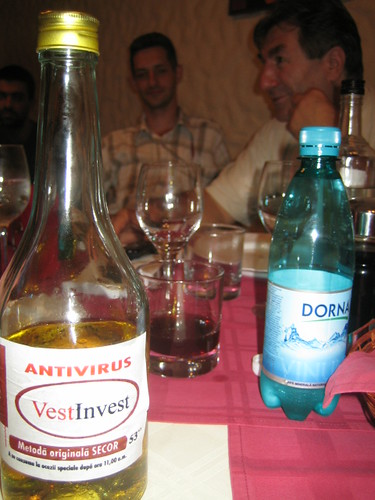 By the time we got back to Prague, we also had tuica, Romania’s national drink (almost always homemade, thus in a recycled bottle), had reacquainted ourselves with Leffe on tap in the Budapest airport, picked up a bottle of Hungary’s national drink, unicum, which was like some kind of medicinal herb drink (see below for Ann’s reaction upon drinking it), and a Polish liquor given to us by the delightful Aleksandra Cholewa from Eurocon (note the Evil Monkey on the front!). 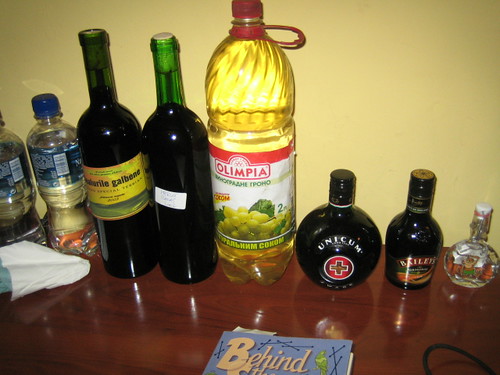 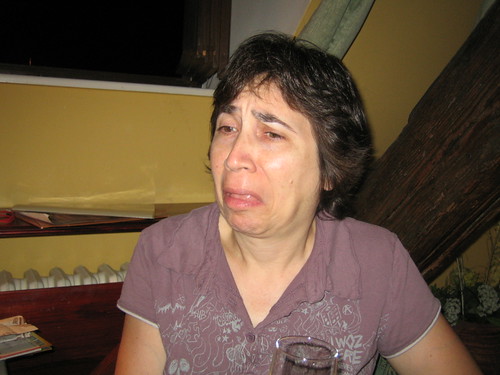 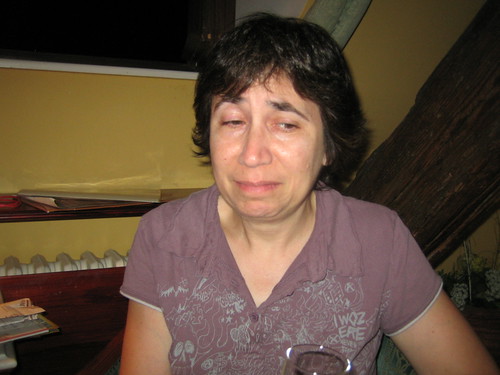 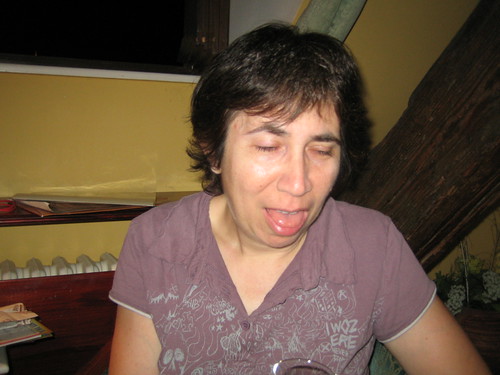 15 comments on “Drinking in Europe: Beer, Wine, The Pub, Beer Bath, and the Beer Messiah”