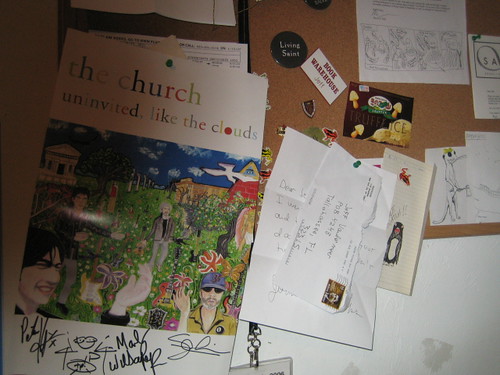 (John Twelve Hawks [?] letter makes my Bulletin Board of the Miscellaneous)

Well, actually, I write now not to damn John Twelve Hawks, but to praise him. Some amongst you may remember that this past week I down-graded John Twelve Hawks to Eleven Turkeys and then, eventually One Sparrow–because of his reluctance to shed his pen name and come forth into the light.

Now, I have received the following missive, supposedly from John Twelve Hawks, and I find that, assuming the letter is indeed from him, I must praise him unreservedly for having a great and devious sense of humor.

Note the return address on the envelope. (I am assuming that if this letter is indeed from Twelve Hawks, I’m not endangering his anonymity by posting the envelope.) 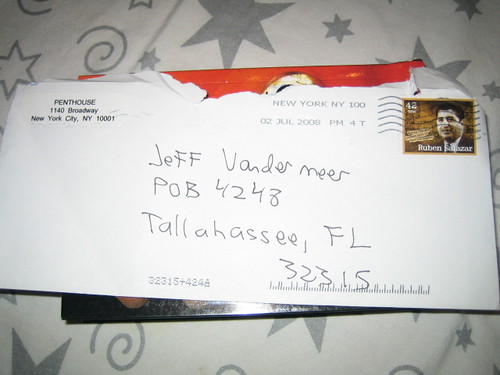 As for the letter itself, it is handwritten and reads: 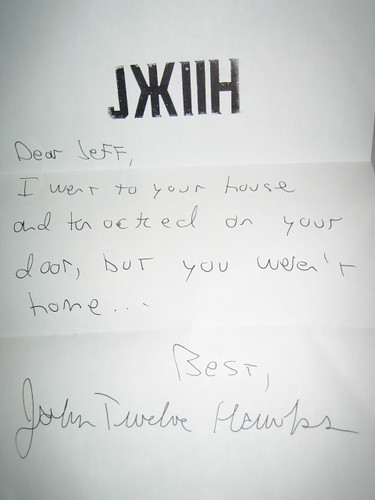 A confession: When I opened the letter I did not at first realize it was from Twelve Hawks, and thus was startled at the idea someone had come to my house unannounced and then dashed off a note about it. When I did realize it was Twelve Hawks, I still did not remember my blog post about demoting his status. Thus, it seemed for a split second related to some kind of odd stalking. Then I remembered–and I laughed and I laughed.

Upon whether this letter is actually from Twelve Hawks or not depends my official reaction to same (although this does not explain why I appear to be writing this blog entry in a slightly elevated Victorian-epistolary-novel style of diction). If it not be he, then bravo! to some young turk who has turned so merry a prank. If it is he (him? i’m very tired), then let me just say: Thanks–that made my week, and I’m still chuckling now.

In either case, Twelve Hawks through his own actions or those of a proxy has gained immunity from demotion or further teasing. I will, in fact, make sure to feature his next novel in some way.

18 comments on “Damn You, John Twelve Hawks! Damn You, Sir!”