Ziesing Books now has Secret Lives available for order. The book will ship by early July–I just overnighted the signing sheets back to the printer. 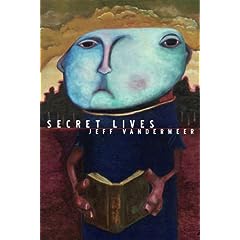 Mark & Cindy Ziesing are my preferred bookseller on this project, as they were the inspiration behind it. Back in 2004, when my collection Secret Life came out, they asked if I could provide some special “extra” for their readers. Since we love Mark and Cindy, I said, well, why don’t I provide a secret life for each person who orders during a certain time frame. They provide me with details of their real life, and I’ll extrapolate off of that. Well, before I could blink, there were more orders than expected and I was busy writing secret lives until my fingers fell off.

Then I thought–what a cool little book this would make. The book should have come out in 2005, but doing some of the secret lives took longer than I thought, and then the publisher, Prime Books, ran into complications. Now, finally, the book is going to come out. These are mostly short-shorts, with a few longer pieces. I never did finish some secret lives, and others aren’t in the book because I wrote and illustrated them longhand, and never could get back in touch with those I sent them to.

However, the finished book is going to be a beauty. It’s got interior illos and cover art by Terry Rentzepis. In addition to a ribbon, there’s a secret life written/illustrated onto the endpapers. Another thing I asked for was a dual cover. So the dustjacket has a full-color image on it, and the boards of the book also have (a different) full-color image on them. Should be a very nice effect. All signed, numbered, and limited to 1,000 copies. (I believe that preorders account for several hundred copies, so it’s more than half-way to sold out at this point.)

The book is very much the kind of thing one dips into, as these are not traditional short stories, but, as I’ve said, more or less extrapolations that start with real life and then drift off into fantasy most of the time.

Now, there have been some snafus about pre-existing orders due to the length delay between initial presales and publication. Here’s what Sean Wallace at Prime has said about that, for any of you who haven’t yet been contacted:

As Jeff has indicated, the book is finally coming out later this month. The lettered edition has indeed been cancelled, due to our inability to replace our original slipcase manufacturer, and we have several options: we can do partial refunds and replace it with the limited; or trade the difference with other books from our catalog; or do a full refund. I apologise for this state of matters, and I hope that anyone who had an order for either edition that doesnâ€™t get contacted in the following few days (to update snailmail addresses) would drop me a line at [email protected]
In the end I think youâ€™ll be extremely happy with the final result of Secret Lives.