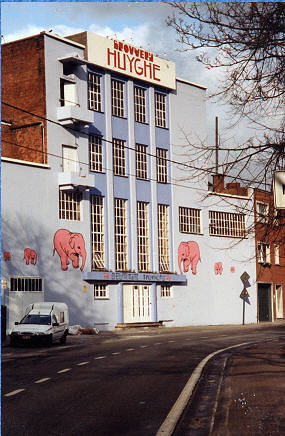 (Where one of the world’s best beers comes from…)

Following up on Part I of the Amazon book-beer post and the related post here on my blog, it’s Part II at Amazon, including a lot of darker beers. It also includes responses from Graham Joyce, Margo Lanagan, Chip Kidd, Lydia Millet, Hal Duncan, Clare Dudman, T.C. Boyle, Michael Swanwick, Small Beer Press’ Gavin Grant, James Morrow, Rudy Rucker, Nick Mamatas, Thomas Disch, and, er, me (Leffe Brun, Delirium Nocturnum, and Aventinus), because after putting many hours of work on this, well, dammit, I felt I had earned it. Besides, no one mentioned any true Belgian beers, which is blasphemy!

Elsewhere in the blogosphere, you’ll find some interesting thoughts about beer in response to the initial post here, and below some mischief from blog readers… 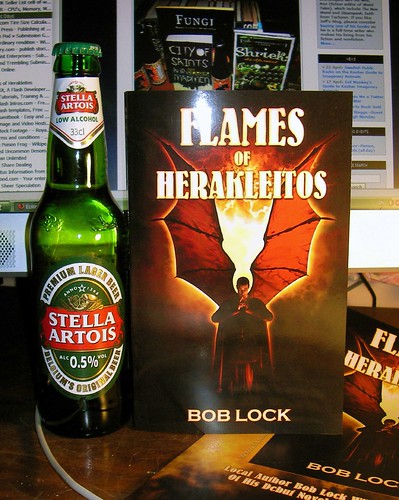 Here’s a photo of my debut dark/sf/fantasy/horror novel ‘Flames of Herakleitos’ and a bottle of Stella Artois which just about qualifies as a beer as it’s only 0.5% (well my writing is bad enough sober, imagine what it would be like if I was drunk!) – Bob Locke

Bob also submitted this photo, proving he has too much time on his hands… 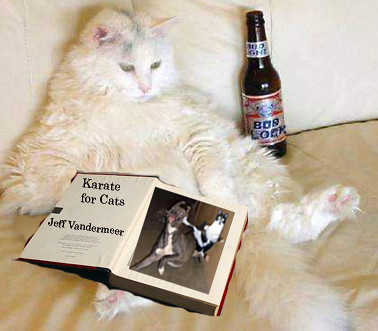 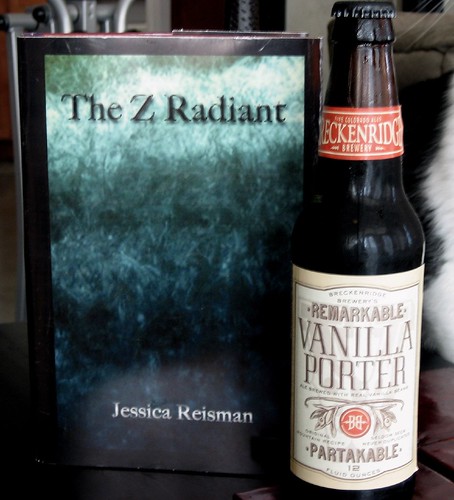 Meanwhile, Corey Redekop says: I wanted to find a beer which captured my love of dark beers, yet had SOMETHING to do with Shelf Monkey. I did a search for “monkey beer” and found a few examples, but not available up here in the north. I also looked for something with a literary theme, as befits the themes of the novel, but the closest I could find was MONTY PYTHON’S HOLY ALE. Cute, but not quite. 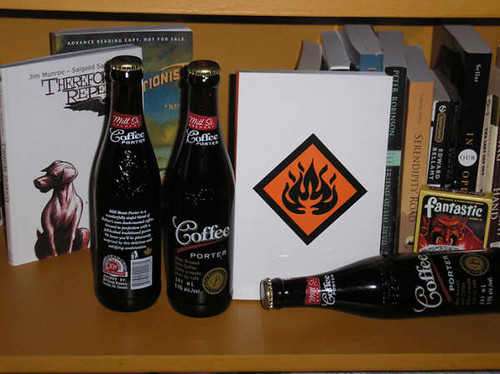 I finally centred on the idea of coffee. My characters work in a bookstore, and books and coffee go together like, well, something that goes together with something else, similies escape me at the moment. They drink Winnipeg’s TWO RIVERS beer at one point, but it’s too ‘typical’ a beer. I wanted something bold, yet interesting, and something more ‘exclusive’ than the usual Canadian beer, as befits the exclusionary nature of the monkeys. I chose Coffee Porter, by Mill St. Breweries in Toronto. It is a gorgeous melange of beer and coffee, with dark chocolate notes that satisfy both thirst and appetite. It’s a meal, but not a meal like a thick coffee stout. It’s a lighter meal, more subtle, yet it stays with you, and leaves you (or me, anyway) wanting another taste. It’s a perfect blend of coffee-shop eliticism and beer-swilling good-naturedness, if that makes sense. It doesn’t really, but then again, neither does the novel.

Crowe submits this mix of the real and non-real: “Introducing my imaginary masterpiece, Blood River – described by Bram Stoker as ‘possibly the most terrifying book never written.’ Old Speckled Hen ale is real and quite nice.” 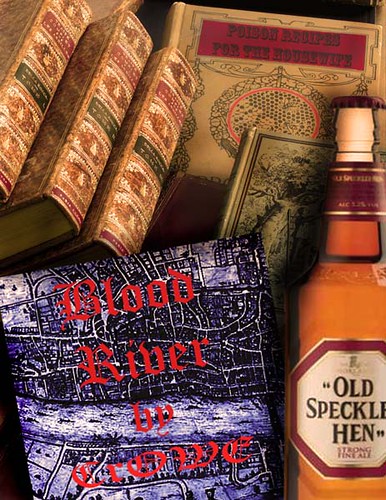 Filed under the category of “some people just can’t follow directions”, Klingon Wine: 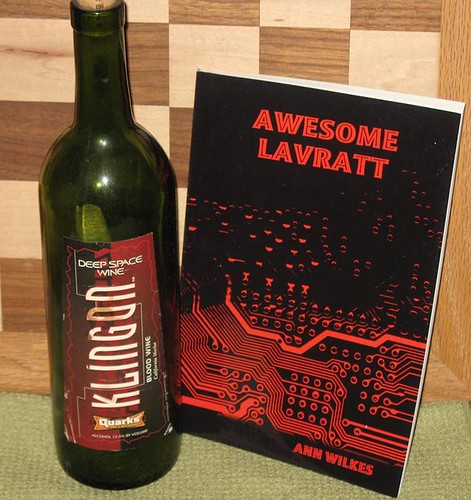 …about which Ann Wilkes writes, “You did let others without books cheat… I hate beer. And why not? I live in the WINE country. So, if I WHINE a little, will you except my cheat? Can you really say no to Klingon Blood Wine? Thanks so much…By the way, if you look closely, it appears that, instead of wine in the bottle, there’s a cigar. It’s actually a moxa stick. It’s an herb that smells like pot, but has therapeutic properties. You light it up and wave it over what hurts. Is that TMI?”

And, finally, a few snippets from Amazon interviews I couldn’t fit into the two features, starting out with more wine…

Peter Zheutlin: “Actually, I am not a big beer drinker, but there is a wine I’d recommend to go with Around the World on Two Wheels: Annie Londonderry’s Extraordinary Ride. It’s called “Cycles Gladiator Pinot Noir,” a California wine that features a 19th century image of a naked woman flying behind her bicycle which she is grasping by the saddle and handlebars. Her sense of liberation and adventure is true to the spirit of Annie Londonderry.”

Tim Lebbon, Bar None: “Bar None features many fine tipples–Abbot Ale, Marsten’s Double Drop, London Pride – ticklers of memory that aid the harried survivors of the apocalypse to hang on the good times passed, and the people long gone, as they journey to find the last bar on Earth. It’s the various ales that spark memories, keeping them alive and fresh, and which maintains their strength to survive in the face to terrible, challenging odds. But perhaps the beer that best personifies the strong, determined character of this novel’s band of survivors is Theakston’s Old Peculier. The name itself seems other-worldly, fantastical, and the beer is dark and heavy, its coppery depths home to many a wandering dream. It’s a muscular, some would say hard drink, and come the apocalypse, there would be no better ale by your side.”

John Grant: “The stuff to drink with Discarded Science, which covers a longer and generally more distant history, would definitely have to be the UK beer Old Peculier (whose spelling is almost always ‘corrected’ in American books!)–another strong one, in fact, though not up to Arrogant Bastard levels.”