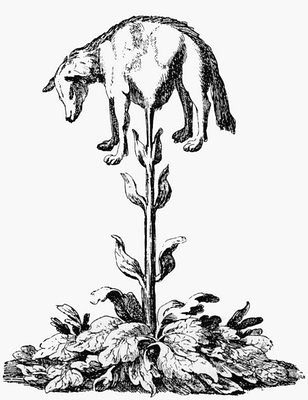 UPDATE: The Kosher Guide to Imaginary Animals will be published in February 2010, hopefully in time for Purim! You can preorder it here. It is a lavishly illustrated book with humorous descriptions of all of the beasts on display, with an intro by Ann, a forward by Joseph Nigg, the bestselling author of How to Raise and Train and Dragon, and a discussion about imaginary animal recipes with Food Network star Duff Goldman. It’s a 5 x 7 small-sized hardcover–the perfect gift.

In honor of upcoming holidays like Passover, I thought I would ask Jeff’s better half, Ann VanderMeer, editor of Weird Tales , co-editor of New Weird and Steampunk, and a practicing Jew who teaches bat/bar mitzvah students, to give us an idea of which fantastical animals and beings would be kosher and which would not be kosher, in terms of gnawin’ off a bit o’ that. Answers below… – Evil Monkey

Abumi-Guchi (furry creatures formed from the stirrup of a mounted military commander) – Ann [with look of disbelief]: “Do they chew their prey?” EM: “I think so.” A: “Then no. Besides, the provenance is suspect.”

Aigi Kampoi (fish-tailed goat) – A: “Yes, that would be kosher because it has cloven hoofs, chews its cud, and has fins and scales. Although, it would still be considered a meat meal, even though it’s partially fish. So you can’t eat dairy with it.”

Amikiri (snake-bird-lobster) – A: “No. Absolutely not. The snake and lobster parts make it treyf.”

Arkan Sonney (fairy hedgehog) – A: “No, because hedgehogs aren’t kosher, so a fairy hedgehog wouldn’t be any different, monkey.” EM: “But they’re delicious!” A: “Even so.”

Brag (malevolent water horse) – A: “Horses are not kosher, no matter how aquatic.”

Bugbear (bearlike goblin) – A: “Bears have paws. Things with paws are not kosher. And they eat meat.” EM: “If it was a bear with hooves that chewed cud and the goblin part was just in its stomach, would it be kosher?” A: “Then it wouldn’t be a bear, idiot.”

Chupacabra – A: “It’s definitely a carnivore.” EM: “What if it’s just for show and they don’t eat their prey?” A: “Well I’m sure they don’t chew their cud and have cloven hooves unless the chupacabra turns out to be some kind of mutant cow.”

Cornish Owl-Man – A: “Unfortunately an owl is not kosher because it is a bird of prey–Lev. 11:17, and obviously you cannot eat a man because that is cannibalism.” EM: “Again, though–delicious!”

Encantado (dolphin-human shapeshifter) – EM: “Surely it’s kosher when it’s a dolphin.” A: “A dolphin is a mammal just like you. It has no scales, even though it has fins. Besides, what if it starts changing while you’re eating it?”

ET – A: “…..?” EM: “It had cloven hooves.” A: “It’s a humanoid.” EM: “It looked like a pile of dung. It seemed to chew cud. Would any alien be automatically un-kosher?” A: “I guess it really depends on the alien–like a plant?” EM: “An alien that comes down to Earth.” A: “No, because they wouldn’t be considered an animal.” EM: “What if they looked just like a cow, but with a brain?” A: “Cows have brains.” EM: “Arggh!” A: “But cows don’t travel to other planets using their brains.” EM: “My point exactly!” A: “Anything intelligent is not kosher.”

Headless Mule (fire-spewing, headless, spectral mule) – A: “No, because the mule itself, even if it weren’t fire-breathing, isn’t kosher. The fire doesn’t cleanse it.” EM: “But it’s self-cooking!”

Hippocamp (horse-fish) – A: “Unfortunately, the horse part makes it treyf, and a little bit of treyf makes everything treyf. So if you had 99 percent fish and one percent horse it would still be treyf.” EM: “And a really fucked up looking hippocamp!”

Hobbits – A: “Not kosher at all. They are sentient beings.” EM: “That brings up a point. They’re actually not sentient because they’re not real, so aren’t they just as kosher as air.” Ann: “No comment.”

Hoopoe (rooster-swallow-chicken-snake-goose-lobster-stag-fish hybrid) – A: “The snake and the lobster make it unkosher–see Hippocamp above for percentages.”

Jackalope – A: “No, rabbits are not kosher.” EM: “Not even rabbits?!! Why not?” A: “Because although it chews the cud, it does not have hooves.”

Jotai (animated folding screen cloth) – A: “Sure, why not? It’s not a food item. Scarf it down to your heart’s delight. So long as it’s made from plant fibers, not a treyf animal. And only one type of fiber–no mixing of wool and linen.” EM: “Doesn’t sound too good…”

Mermaid – A: “No, for the obvious reasons.” EM: “What if you marry one? Is that kosher? Will a rabbi marry you?” A: “Kosher is a term about eating, not about sex.” EM: “I’m not talking about sex–I’m talking about marriage!” A: “If the mermaid is Jewish, the rabbi will probably marry you. But only if you’re Jewish too. But you’ll definitely have to find the right rabbi…”

Mongolian Death Worm – A: “No, because you cannot eat anything that crawls on its belly.” EM: “Does that mean an injured kosher animal that is crawling along isn’t kosher any more?” A: “Yes, because you can’t eat an animal that’s been injured or is sick.” EM: “It’s a wonder you haven’t all starved to death.”

Sea Monkeys – A: “Only if they have fins and scales. Wait a minute–aren’t they actually brine shrimp? Then no.” EM: “I don’t think so. The package shows these cute little things with human faces.” A: “Well, in that case…NO!”

Shedim (chicken-legged demon) – A: “If you have to eat a demon, you really ought to just go off and die somewhere.” EM: “Good point.”

Vegetable Lamb of Tartary – A: “Oh, absolutely kosher! Vegetables are kosher and lambs are kosher! Nice combination. How about some mint with that meal!”

UPDATE: If not coming here from Boing Boing, check out additional comments on their post about, er, this post.