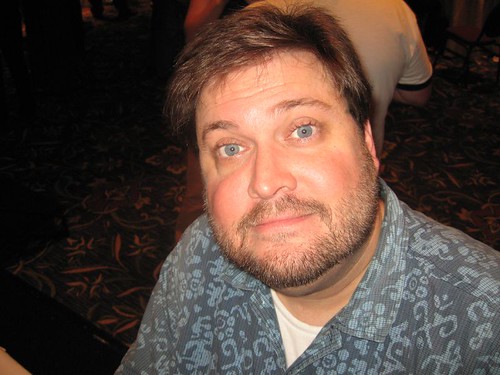 In support of the short story, and specifically those talented writers who are currently “bookless,” which is to say those writers who are at that stage of their career where a collection or novel is a year or more away, I’m doing a new feature called Conversations with the Bookless, of which this is the latest installment. (See also: Kelly Barnhill, Paul Jessup, Rachel Swirsky, Nathan Ballingrud, and [conducted by Rick Klaw] Paul O. Miles, Scott A. Cupp, and Chris Nakashima-Brown) The fact is, if you don’t have a book out, it’s harder to get attention and it’s harder for reader attention to crystalize around you. I hope these interviews introduce readers to some of the great talent that, in the coming years, will be amazingly and bountifully bookful.

In the case of John Langan, between emailing him the questions and getting the answers, he received an offer for a fiction collection. This seems oddly appropriate for a writer neither here nor there–someone who has his roots in traditional genre fiction but expresses that influence in experimental ways. Langan’s stories are not confrontational necessarily, but they do make you think, and they do make you enter his universe. He’s not afraid to use any technique necessary to tell an effective story. I think this is what I find compelling about his fiction–he’s not formally experimental but he does take changes. He’s experimental in the sense of doing whatever’s best for the characters and plot. I’m probably breaking an unspoken rule by doing an interview with someone soon to be bookful, whatever the circumstances, but…

Where are you, right now, as you’re writing these answers?
Right now, I’m sitting at the heavy wooden desk in the part of the house I tend to call my office; although it’s really fairer to call it our office or the office, since my wife works here as well. The desk is one that my landlord and I salvaged from an assortment of Vassar-college surplus that was on its way to the landfill; the chair I’m sitting on in front of it originated from a yard sale, and is not nearly as solidly-constructed. The desk supports a laptop; a largish metallic desk lamp whose stylings suggest IKEA; a row of upright books, some of them volumes to which I’ve contributed essays or entries (i.e. ICONS OF HORROR AND THE SUPERNATURAL, SUPERNATURAL LITERATURE OF THE WORLD: AN ENCYCLOPEDIA), the rest those books that I want to have close at hand, almost for their totemic value (the Penguin volumes of Lovecraft’s stories, Flannery O’Connor’s collected stories, a selection of Paul Valery’s writing, a book of Gauguin’s paintings).

The books are held up by the lamp on one end, and a squat stone gargoyle that was a gift from a former student on the other. There are also books and papers piled to either side of the laptop, including the first four volumes of Alan Moore’s run on The Swamp Thing, Bob Waugh’s THE MONSTER IN THE MIRROR: LOOKING FOR H.P. LOVECRAFT (for my nickel, the single best critical study of Lovecraft’s fiction yet produced), and one of the many phone books that seem to infest our house. The desk faces one large window flanked by two smaller ones. The windows look out on our neighbors’ mustard-yellow house, the wooded hill that runs behind both our and their houses, and, if I look slightly to the right, the street on which we live. I spend a lot of time staring out the big window at the sky over the neighbors’ house, the lower two-thirds of which is criss-crossed by the branches of tall, thin trees, the upper part of which is frequently traversed by the contrails of jets heading I’m not sure where. On the window ledge there are a number of small toys, most of which I retrieved from an enormous tub of toys my wife brought home from a roadside giveaway–there are a few Disney figures (Zeus, Merlin, the Evil Stepmother in witch form, brandishing her apple), several Halloween Simpsons figures, and a small rubbery Godzilla (the American one, I fear). In among these figures are a number of casts of my lower set of teeth, which were made during the course of a couple of simultaneous root canals a few years ago. There is also a bottlecap showing a red devil mulling over a tall glass of beer. To my left and behind me, there are bookcases crowded with books, a file cabinet that holds important family papers in the middle of them. More toys decorate the shelves of the bookcases: Freud and Poe action figures, a miniature of Minas Tirith, small replicas of the Universal movie monsters, a zombie Spider-Man. The bookcase right behind me has a metal owl perched on one corner; it’s not quite a toy. Sometimes I lean postcards of famous paintings against the row of books at the back of my desk; currently, Gauguin’s L’APPEL and Chagall’s OVER THE TOWN jostle photos of my wife and younger son. There are more photos of my family on the wall to my left, as well as a large poster for Warren Zevon’s GENIUS.

What do you like most about short fiction?
I value the extreme compression of a work like Poe’s “Masque of the Red Death” or Hemingway’s “Hills Like White Elephants,” that state in which every word is supercharged with meaning. I suppose it’s at this length–the short-short–that I see fiction most approaching the quality of lyric poetry. That said, as a self-identified writer of horror fiction, I’ve always found the shorter lengths a particular challenge, since they so often lead to what I call the Trap Story, which is to say the narrative whose sole purpose is to subject the protagonist to a messy and/or ironic death. I suppose every genre has its equivalent, the story type in which the concentration is on one of the fundamental impulses driving the field. For me, though, the problem with the Trap Story is that it’s very hard to engage the reader in any kind of meaningful way; as a friend of mine said to me once, “When I read a horror story, I don’t bother caring about the characters, because I know they’re all just going to die, anyway.” You can hope to shock the reader, but I’m not sure what you can expect beyond that. There’s always the recourse to beautiful or baroque style, of course, but that can be a rather chill pleasure.

So the length of short fiction I incline towards is the longer stuff, the novelette, the novella. Henry James called the novella the “blessed form,” and I tend to agree with him. The novelette and the novella allow you the chance to develop your characters and their situations in a meaningful way, to bring them forward into three dimensions, while still preserving something of an economy of effect. It’s no accident that much of the best work that has been and continues to be produced in the field
employs this length (i.e. Laird Barron).

What do you most value in the fiction you love?
I love fiction that involves me as a reader. If I can look up from what I’m reading and feel momentarily disoriented, unsure of my surroundings, that’s great; if that feeling persists, so that, even as I’m moving around this world, it seems as if part of me is still wandering through what I’ve read, so much the better. That’s what I strive for in my own work. I’m not quite sure how to quantify this, but I like fiction that conveys a sense of its writer’s commitment to it, a sense that the writer is very much engaged in what s/he is doing.

What issues or ideas about fiction have been foremost in your mind of late?
There are a few, ranging from those of practical concern (How can I finish the stories I’m writing and still have time for things like completing my dissertation and finding a real job? Who’s going to publish this novella?) to those of a more theoretical nature (What is the place of formal experimentation in short fiction? What is the place of the sublime in horror fiction?). I’m too busy right now to have much time to worry too much over any of them, but there are two that I mull over some mornings on the drive in to work. The first concerns the bridging of that high-low culture divide that we all insist is an artificial divide, an outdated and -moded cultural construct, but that continues to exert a considerable influence on both commercial publishing and ivory-tower academia. The second is even more far-ranging, and concerns desert island books: you know, those five or ten books that we immediately name whenever someone asks us what we’d take with us for reading material to a desert island. Not that often does a work of fantastic literature make that list for me, which is strange, considering that’s what I write and what I (say I) love to read. Jeff Ford’s THE PHYSIOGNOMY was a recent choice, as was Peter Straub’s HOUSES WITHOUT DOORS. I haven’t reached any firm conclusions about the implications of this reaction, but it’s something that’s on my mind.

Where can we read your fiction online right now, and where is work forthcoming?
Pretty much all of my fiction has appeared solely in print venues; I think there is an excerpt from “Episode Seven,” [a story] John Adams reprinted in his anthology, WASTELANDS, on the WASTELANDS website, but that’s about it, although I did write and record a 30-second horror story for APR’s “Weekend America” Halloween show that may be still be floating around in the ether. As for new work: I’ll have a substantial novella, “Laocoon, or, The Singularity,” included in my forthcoming collection (see below for more on this); another novella, “How the Day Runs Down,” will appear as the sole original piece of fiction in John Adams’s forthcoming zombie reprint anthology from Nightshade, THE LIVING DEAD, which is due out around Halloween of this year; and I’ll have a novelette, “Technicolor,” in Ellen Datlow’s anthology of original stories inspired by Edgar Allen Poe, POE, which should be out from Solaris in early 2009.

How do you plan to rectify your booklessness?
My booklessness will be cured this coming summer, with the publication of MR. GAUNT AND OTHER UNEASY ENCOUNTERS by Prime Books. This book will feature the four long stories I’ve published so far, as well as a new, very-long novella. Elizabeth Hand has kindly agreed to write the introduction, and Sarah Langan (no relation) has provided a very flattering early notice which should be available once you’re able to pre-order the book on Prime’s website.

One comment on “Conversations with the Bookless: John Langan”