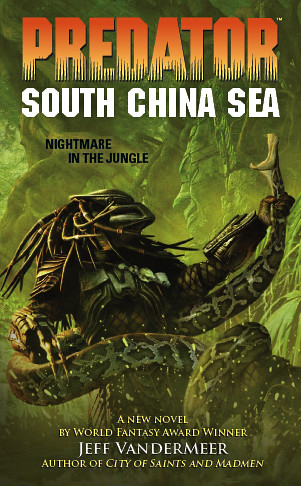 Here it be, art by Stephen Youll. I’m really excited about it. This is a little darker as a jpeg than the cover actually is, just FYI.

The novel is out in August of this year, and I’ll have more information when it’s available.

Due to the timing on this, Youll had to do the cover from the synopsis, which led to something kind of funny–there was no snake attack in the novel as completed. However, it’s an easy fix since there’s a summary scene where the Predator is sequentially battling lots of animals. I’ll just stick in three sentences about a python, which doesn’t hurt anything. Youll tried to incorporate Pol Pot the croc, but it just didn’t work composition-wise, and I understand why.

I know this is probably too small to see details, but in the big version I printed out, you can see the drops of water “on the glass,” as if the splashes are up against a camera lens. And there’s a very nice slanted vertical light in the upper half, streaming down.