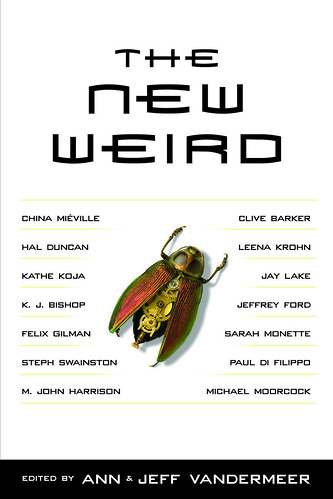 In honor of the publication of The New Weird anthology, which we hope you’ll consider buying, Ann and I have decided to have a little contest. Tell us your “new, weird” story–something strange (but entertaining and either PG-rated or with the naughty bits blocked out) that happened to you or you witnessed in the last couple of years. Work-related, fun-related, whatever–go wild. Hopefully some of these will be bizarre but also uplifting, although that’s not a requirement. It’s more about…hey, this world we live in is an odder place than we might think. All of those stories in The New Weird from China Mieville, Clive Barker, K.J. Bishop, Steph Swainston, Jeffrey Ford, Jay Lake, Pual Di Filippo, Michael Moorcock, M. John Harrison, and others–they’re not strange; the world is strange!

What do you win? The three winners, chosen by Ann and me, will win ONE COPY OF EACH ANTHOLOGY WE EDIT BETWEEN NOW AND 2010, PERSONALIZED. Yes, that’s correct. You will get a copy of The New Weird, Steampunk, The Leonardo Variations (Clarion charity anthology), Fast Ships/Black Sails (pirates), Best American Fantasy 2, Best Horror 2009, Last Drink Bird Head, Mapping the Beast: The Best of Leviathan, and various other anthologies currently in the planning stages. Heck, we’ll even throw in the first couple issue of Weird Tales with Ann as fiction editor. We also reserve the right to give out honorable mentions, said HMs to receive a copy of the NW antho.

Contest Rules:
– Must post the incident in the comments field on this blog entry (with at least a first name for now, although anonymous monikers are vaguely acceptable) and also, if you have a blog, we strongly suggest you post it there and link back to us (gives us all more traffic and content!)
– Try not to go over 500 words in relating your true story
– Contest ends February 17th, Sunday, at midnight EST.
– You can be located anywhere in the world and still enter the contest, but we reserve the right to ship books to overseas contest winners using an method other than first class airmail.