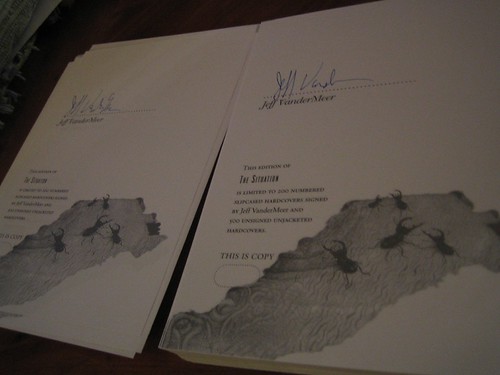 I just scribbled on and sent back the signing sheets, so it must be real! The Situation, coming soon from PS Publishing (March-April). Available for pre-order in two hardcover editions:

500-copy signed limited with art on the boards

Here’s some blurbage and an excerpt:

“In The Situation, Jeff VanderMeer has created a work of surreal humor, bemused sadness, and meticulous artifice. It is as if the workplace novels of Sinclair Lewis and Joshua Ferris had been inverted, shaken, and diced until they came out looking like a Terry Gilliam creation. That a story which curves so resolutely inward toward its own logic could also be so poignant is something of an astonishment.” – Kevin Brockmeier

“Take Dilbert, insert him into Gormenghast, add lashings of nighmarish biotech, and you’ll have something of the flavour of Jeff VanderMeer’s The Situation. This darkly hilarious story tells horrible truths about modern work and workplace relations. Anyone who has ever had a dysfunctional colleague, or served a flawed organisation, will recognise all too easily the machinations and the monsters in here.” – Margo Lanagan

How It Began: Degradation of Existing Processes

My Manager was extremely thin, made of plastic, with paper covering the plastic. They had always hoped, I thought, that one day her heart would start, but her heart remained a dry leaf that drifted in her ribcage, animated to lift and fall only by her breathing. Sometimes, when my Manager was angry, she would become so hot that the paper covering her would ignite, and the plastic beneath would begin to melt. I didn’t know what to say in such situations. It seemed best to say nothing and avert my gaze. Over time, the runneled plastic of her arms became a tableau of insane images, leviathans and tall ships rising out of the whorling, and stranger things still. I would stare at her arms so I did not have to stare at her face. I never knew her name. We were never allowed to know our Manager’s name. (Some called her their “Damager,” though.)

The trouble at work began after I came back from a two-week vacation at my apartment in the city, for this is when my Manager changed our processes. For as long as I could remember, the requests for the beetles we made came to Leer, my supervisor. I had made beetles for almost nine years in this way, my office carpet littered with their iridescent carapaces, the table in the corner always alive with new designs and gestation. However, when Scarskirt was hired to replace Mord, who had moved to Human Resources, we no longer followed this process.

Worried, I pointed this out to Scarskirt during the brief interlude when I taught her how to make her own beetles. She just laughed and said, “Maybe a change is good. We all do such good work, it shouldn’t matter, right?”

I should note that “Leer,” “Scarskirt,” and “Mord” are not their real names. And all three were flesh-and-blood like me when I first knew them. Leer looked a little like a crane, and I had counted her as a friend, just as Mord had been a friend before his move. Scarskirt, though, stared at reflective surfaces all day and flattered so many people that I was wary of her.

After I came back, I found that Leer and Scarskirt shared an office and did everything together. Now, when the requests came in, all three of us were notified and we might all three begin work on the same project.

I remember coming into one meeting with the Manager, holding the beetle I had just created in my office. It was emerald, long as a hand, but narrow, flexible. It had slender antennae that curled into azure blue sensors on the ends, its shining carapace subdivided in twelve exact places. The beetle would have fit perfectly in a school child’s ear and clicked and hummed its knowledge into them.

But Scarskirt and Leer had created a similar beetle.

My Manager immediately thought it was my fault, and erupted into flame.

Leer stared at Scarskirt, who was staring at the metallic table top. “I thought we talked to you about this,” Leer said to me, still looking at Scarskirt.

“No, you didn’t,” I said, but the moment belonged to them.

My Manager forced me to put my beetle in my own ear, a clear waste, and an act that gave me nightmares: of a burning city through which giant carnivorous lizards prowled, eating survivors off of balconies. In one particularly vivid moment, I stood on a ledge as the jaws closed in, heat-swept, and tinged with the smell of rotting flesh. Beetles intended for the tough, tight minds of children should not be used by adults. We still remember a kinder, gentler world.

After this initial communication problem, the situation worsened.

4 comments on “The Situation–Available for Pre-Order”