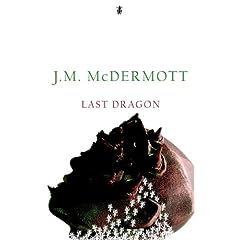 J.M. McDermott’s first novel, Last Dragon, is coming out in February from Wizards of the Coast, part of their new Discoveries series. This is part of what I wrote in a forthcoming Realms of Fantasy review of the book:

“Relentless, dark, and dangerousÃ¢â‚¬Â¦A rare kind of clarity inhabits McDermott’s prose through the character of Zhan and the entire novel is a breath of fresh air in the sometimes moldy room that is traditional fantasy fiction. I’m not prepared to say that this novel is a work of genius, but comparisons to Gene Wolfe, in particular, are well-earned and I would not be surprised to see this novel on finalist lists come awards time.”

As Library Journal wrote: “A journey focused on revenge becomes an odyssey of self-discovery and of the founding of an empire in blood and sacrifice. As Zhan searches for her grandfather, a creature no longer human that has killed his entire village, she travels in the company of Seth, a fire-breathing shaman; Korinyes, a gypsy who is more than she seems; and Adel, a paladin present at the slaying of the last dragon. McDermott’s debut novel requires careful reading to piece together a story told in nonlinear form, as mercurial as memories and as visceral as death. This fantasy adventure belongs in libraries where literary fantasy in the tradition of Gene Wolfe, A.A. Attanasio, and Gabriel GarcÃƒÂ­a MÃƒÂ¡rquez is popular.”

I really loved this novel because it reads like fantasy for adults, because it contains wonderful invention to it, such as its take on golems, and because it is extraordinarily like looking in on an alien place–something we don’t get much in fantasy. We tend to get echoes or reflections that while they may be entertaining, may indeed be deep, still seem familiar. Familiar is good sometimes, but the strange is also something fantasy readers look for, I think, and Last Dragon delivers that. (Not to mention, that it’s a very interesting take on swords-and-sorcery.)

The novel also solves a potential problem in terms of that horrible word “difficult,” somewhat mistakenly invoked without being said in the Library Journal review–as in, “this might be difficult for some readers” (which I always think of as a way of saying, “Hey, readers–we think you might be a little ‘tarded, so we’re giving you this here warning…”). Last Dragon has a strong literary voice, but is told in short chapters. This structural decision allows Last Dragon to have relatively fast pacing while not sacrificing its literary or stylistic depth. I also somewhat regret invoking Gene Wolfe in my review, because although there is something in the prose that reminds me of Shadow of the Torturer, McDermott is much more directly muscular, whether describing barbarians or how to defend against arquebuses.

I won’t say the book is without flaws–sometimes the chapters are too fractured, sometimes the prose does become slightly overheated (although, in the context in which this occurs, it seems justified most of the time). But the novel’s brain, its heart, and its passion more than make up for this. I honestly think readers who like both literary and traditional fantasy should enjoy this book–if they give it a chance.

Why do I say “if they give it a chance”? As always, too many reviewers have certain blueprints in their heads of what they should enjoy and of what is worthy, and if it doesn’t fit that, it isn’t a flaw in their heads–it’s a flaw in the book. This is the kind of novel that is likely to get some negative reviews for that reason. (Thus my overheated title to this entry–just to get your attention…)

14 comments on “Last Dragon by J.M. McDermott: Best First Novel of the Year, or Just One of the Best, Period?”