As promised, I am continuing Jeff’s excellent Bookless series but with a Texas bent. Over the next two weeks, I will introduce you to three Texas short story writers, each with a unique perspective. As for what the series is about I think Jeff said it best.

In support of the short story, and specifically those talented writers who are currently “bookless,” which is to say those writers who are at that stage of their career where a collection or novel is a year or more away, I’m doing a new feature called Conversations with the Bookless, of which this is the sixth (3rd Texas) installment. (The first four were with Rachel Swirsky, Nathan Ballingrud, Paul Jessup, Scott A. Cupp, and Chris Nakashima-Brown.) The fact is, if you don’t have a book out, it’s harder to get attention and it’s harder for reader attention to crystallize around you. I hope these interviews introduce readers to some of the great talent that, in the coming years, will be amazingly and bountifully bookful.

Even with his modest output, Paul O. Miles has established himself one of the talented new writers emerging from the vibrant Austin, TX literary community. Probably best know for the pulp adventures of the Communist action hero The Red Poppy, Paul Miles’ unusual perspectives and imaginative pastiches have garnered an Honorable Mention in The Year’s Best Fantasy and Horror 2006: 19th Annual Collection for the unusual short tale “Habe Ich Meinen Eigenen Tod Geseh’n” and the alternate Robert E. Howard history story “A Penny A Word” was a Finalist for the 2007 WSFA Small Press Award.

Where are you, right now, as you’re writing these answers?
I am sitting at my computer in my central Austin apartment. It’s a little after one in the morning and I am listening to the Afro-poppy Budos Band II album.

What do you like most about short fiction?
Short fiction generally does not have to be as tied to plot as novels, so it can play more with voice and form without annoying me as a reader. Damon Runyon and Clark Ashton Smith are two writers who use very mannered voices for their short stories that I don’t think would work if they were much longer. The mystery writer Paul Cain is another. Then again, I do also like a nice plot.

What do you most value in the fiction you love?
In longer books, I love the total immersion. To give an example, I once got hit by a car as I was reading, so into the book that I just stepped out into traffic. I should lie and say that it was Don Quixote or Ulysses, but in fact it was Tom Clancy’s Red Storm Rising. If I ever did go out that way, I hope I could have counted on my friends to come to the morgue and put a decent book in my dead fist. With short fiction, I appreciate when an author has a single good idea and rings the bell really hard–Phillip K. Dick did that a lot.

What’s the most interesting thing you’ve learned in the last week?
That thing that you swing back and forth in church to spread smoky incense is called a thurible and the guy swinging it is called a Thurifer. I’m sure a Catholic would be rolling her eyes at that, but I’ve only rarely seen the device. Sunday, I went to the dedication of a new Episcopal church and the service was a bit higher than I’m used to. I’ve always been fascinated by church doctrine, which apparently runs in the family. I’ve been told my maternal grandmother used to go around sampling different religions in New Orleans–Catholic, Jewish, whatever she could get into. Which reminds me of when I was a little kid and my Aunt Elizabeth died. We went to New Orleans for her memorial service. She’d been a member of one of the local groups that puts on Marti Gras. (Was it the Zulus? I don’t remember which one.) Anyway, they had their own little ceremony within the ceremony. So you had these nicely dressed up women who gathered around the coffin. And at one point, I remember they knocked on her coffin and sternly said: “Elizabeth? Elizabeth? She does not answer.”

And after they were done, my Aunt Urselle, who loved Aunt Elizabeth to death, leaned over and whispered to my mother: “If Elizabeth had said anything, I’d have been climbing over people to get out of here.”

Where can we read your fiction online right now, and where is work forthcoming? (online or off)
Well, for something to be forthcoming, I’ll guess I have to finish the stuff I’m working on right now. On the web, I wrote two stories starring a depression era Communist pulp hero called the Red Poppy (“Death in Four Colors” and “The Segar Caper, or What Goes Around Comes Around“). The game I set myself with those stories was to take on the part of an author of the period, so it was fun to try and get the “author’s” voice onto the page. Those are still on Revolution SF. “Habe Ich Meinen Eigenen Tod Geseh’n”, a short story about a little magic lantern that tells a person’s future was in Polyphony 5. Most recently, “A Penny a Word“, which I co-wrote with Rick Klaw, was published in Cross Plains Universe.

Why do you write?
When I can get something rolling down the hill, I write because it is actually kind of fun. I’m still at the basic level of looking at something I’ve written and being surprised and happy that it makes any sense to anyone other than me.

How do you plan to rectify your booklessness?
My problem, besides output, is that my writing tends to be all over the place without any natural grouping or category. At one point, I’d thought of doing a few more Red Poppy stories and pulling them together as a fix-up. 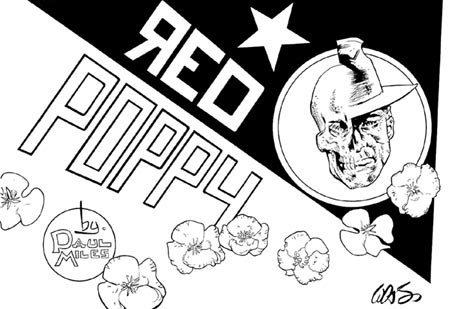 One comment on “Conversations with the Bookless: Paul O. Miles”