As promised, I am continuing Jeff’s excellent Bookless series but with a Texas bent. Over the next two weeks, I will introduce you to three Texas short story writers, each with a unique perspective. As for what the series is about I think Jeff said it best.

In support of the short story, and specifically those talented writers who are currently “bookless,” which is to say those writers who are at that stage of their career where a collection or novel is a year or more away, I’m doing a new feature called Conversations with the Bookless, of which this is the fourth (1st Texas) installment. (The first three were with Rachel Swirsky, Nathan Ballingrud, and Paul Jessup.) The fact is, if you don’t have a book out, it’s harder to get attention and it’s harder for reader attention to crystallize around you. I hope these interviews introduce readers to some of the great talent that, in the coming years, will be amazingly and bountifully bookful.

A quintessential Texas short story writer, Scott A. Cupp produces unusual slipstream tales steeped in Texas culture and history. Perhaps best known for his heretical “Thirteen Days of Glory,” a re-imagining of the Battle of the Alamo as a struggle for transvestite rights, Cupp, a former Campbell award nominee, continues to experiment and press the outer boundaries of the absurd with tales such as “King of the Cows”, “The Singing Cowboy’s Apprentice” and “One Fang.”

Where are you, right now, as you’re writing these answers?
Oddly enough, I am sitting in a La Quinta hotel room in South Austin wishing that the World Series had started tonight instead of tomorrow [And ended quickly some six days later– ed]. It is October and World Fantasy is next week.

What do you like most about short fiction?
What I like most is that I do not have to invest a large amount of time into doing a short story as opposed to trying to do a novel. I can see a beginning and an end in a short time. When I write (which is infrequent at best) I do not have long periods to devote to it. I write and rewrite extensively.

What do you most value in the fiction you love?
I love the imagery created by the writer with his choice of word or phrase. Recently I was re-reading some Cordwainer Smith’s “Scanners Live in Vain”. The visual images conjured up by his choices of words such as “Cranch” still thrills me. A novel that I truly love The Last Starship From Earth [by John Boyd] begins with a paragraph that goes something like this “Rarely is it given Man to know the time when Fate enters his life. But because he had just looked at his watch before seeing the girl with the hips, Haldane knew the date and the time.” Delany’s Nova is another book that speaks lyrically to me. And the short fiction of Clark Ashton Smith is amazing.

What’s the most interesting thing you’ve learned in the last week?
This morning I learned about Toynbee Tiles which are found in various cities around the US (and maybe the world) relating the work on Toynbee and Kubrick’s 2001. They are odd and unfathomable. My step-brother lives near a couple and had never heard of them. I believe he will investigate them soon and let me know what he sees or finds. 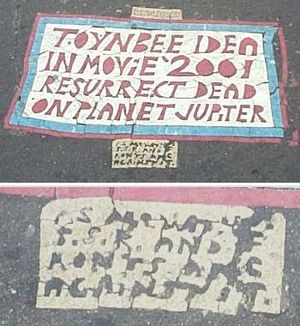 Where can we read your fiction online right now, and where is work forthcoming? (online or off)
I have several stories online at RevolutionSF. They include “In the Mood“, “Thirteen Days of Glory“, “The Man Who Ate Goldfish“, and “The Singing Cowboy’s Apprentice“. Each has their own quirkiness. Forthcoming – nothing. I have a story making the rounds “Johnny Cannabis and Tony the Purple Paisley (sometimes) Colored white Lab Rat”. As you can imagine, the world does not seem to be rushing toward buying a Hippy Drug Fantasy. Go figure.

Why do you write?
It was part of a bad upbringing. In high school I always tried to combine my vocabulary tests into a unified story idea. It was weird. In college, I ran into a Science Fiction Group at the Univeristy of Texas and through them fell into a group that included, at various times, Bruce Sterling, Steven Utley, Lisa Tuttle, Lew Shiner, Howard Waldrop, Walton Simons, Al Jackson, Bill Wallace and others. Chad Oliver was our faculty adviser. There was a lot of writing going on and I attempted a few truly dreadful pieces. I waited five years before trying again. I had met Joe Lansdale, Neal Barrett, Jr. and Bill Crider during this period. They inspired me. I wrote a story in 1982 called “Night of the Blade”. I finally sold it in 1987, exactly as written to a small press detective, noir magazine. It took another couple of years before I sold “Jimmy and Me and the Nigger Man” to a western anthology edited by Joe Lansdale and I was off. I write infrequently as I said before. I have to work out an idea that I think is interesting and it generally has to percolate for a while. It took close to ten years between conception and execution for “Johnny Cannabis”. It took three days for “Thirteen Days of Glory” and “King of the Cows”. I have one story idea that has been sitting there for more than 20 years. One day it will happen.

I have taken some flack because I do not write frequently. That is really incorrect. I do not write FICTION frequently. For the last 27 years I have worked as an auditor for one of three firms (24 yrs, 9 months, 3 days for Montgomery Ward). During that time, I produced a lot of written work. Hundreds of audits ranging from little catalog units to monster Distribution Centers and special reviews. There were special audits resulting in legal actions, audits resulting in cost recoveries from vendors, audits resulting in people reflecting on their career choices and generally opting to find another career. So I write a lot. Just not much fiction. And it has to be special for me to do it. I would rather have ten good interesting stories than 100 stories people read and never remember again. I do not believe you can read “Thirteen Days of Glory”, “King of the Cows”, or “The Singing Cowboy’s Apprentice” and forget them easily. I’m really quite proud of that work. And my new piece “Johnny Cannabis” is one I really, really like. Those people who have heard me read from it really like it. Just got to find that one editor with the twisted sensibilities and background that matches up to me.

How do you plan to rectify your booklessness?
Oddly enough, during the 18 years since my first professional sale and now, have not generated a large quantity of work. Mark Finn (a fine Texas writer) and I are working on two collaborative stories right now. When those are finished, I should have enough to begin to see if there is any interest. I had one publisher about three years ago who expressed some interest. I will have to see if that interest has not waned too much. 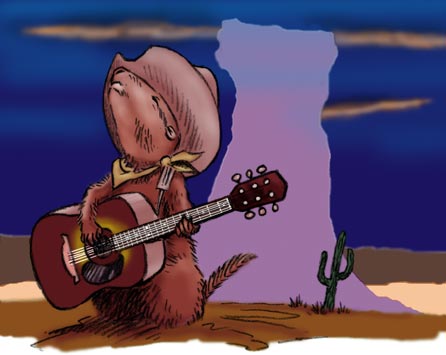 7 comments on “Conversations with the Bookless: Scott A. Cupp”