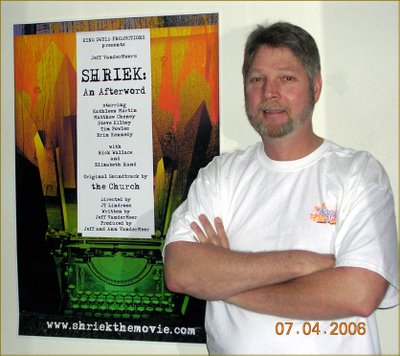 A Predator, thinking about Dave Larsen

People, if you’re going to write a Predator novel, you gotta go in loaded for bear. Bigger’n bear, actually. It’s just that simple. No pussy-footing around. No namby-pampy, no wishy-washy, and ABSOLUTELY NO WATER PISTOLS.

So you go to your main source for weapons information, that being my friend Dave Larsen, he of the Ambergris knife creation… 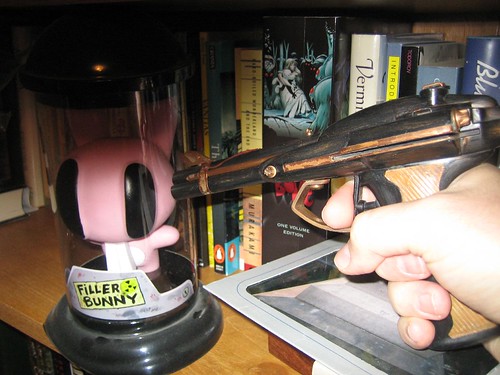 …and now he of the know-your-personal-weapons-when-on-an-island-in-the-South-China-Sea-information, set out after the cut. (Thanks, Dave–couldn’t do this project without you.)

Again, you go into a situation like this, you go hard, you go strong, and you NEVER stop to pick wildflowers. ‘Cause that’s how you get two-dozen M-16 rounds in your sorry ass.

Predator novel writing begins…NOW. (All info below provided by Dave.)

AK-47
-Soviet standard military small arm since 1947
-Full auto, 30 rounds to 75 rounds drum magazine
-Used by Warsaw Pact, Post-Soviet states, pretty much everyone worldwide
-Inexpensive to manufacture and easy to clean and maintain
-Rugged as hell, almost impossible to get too dirty or wet to fire
-The Kalashnikov is one of the most reliable weapons ever made

QBZ-95
-Chinese, in service since about 1995
-Used by People’s Republic of China and Cambodia
-Semi-auto bullpup configuration – magazine and receiver behind the trigger
-The 5.8 x 42 mm DBP87 is a small high velocity round similar to 7.62 X 39mm
-Considered to be more effective due to higher muzzle velocity
-These rounds effective against human targets – not so much with large game

Ruger No 1 Tropical
-Known for its massive recoil, very simple and reliable “Express Rifle”
-Big Game
-This one is stainless steel, a plus in a jungle
-40″ overall length is relatively shorter than other big game weapons, again good for jungle activities

PEOPLE AND THEIR WEAPONS (not including Predator)

Pirate Crew
AK-47s, and big, simple knives (lots of them)

23 comments on “Predator: Me ‘N’ Dave Larsen Are Not Playing Around Here, Folks”