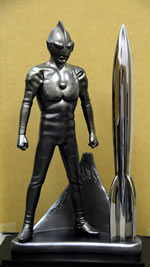 While I wait for Amazon to post my official blog entry about the Hugos, with info and quotes from Jay Lake, Ellen Kushner, and K.J. Bishop, I thought I’d post the bits I couldn’t use in the Amazon piece here…

What was it like handing out an award at the Hugos?
The Nippon 2007 committee had reorganized the traditional order of presentation a little bit, so the Hugo I gave to Gordon van Gelder was the first Hugo of the evening. Even though several awards had gone before, and I was even onstage for the Campbell, being the first presenter was like opening the show…it was just freaking cool. I gave out a Hugo, dude. I got up and smiled in front of 1,500 of my closest friends, said a few nice words, then I gave out a Hugo. I think the only thing better than that would be winning one.

What’s your best memory from the awards ceremony?
Elizabeth Bear and I had cooked up the tiara last year, before John Scalzi won, as a way for the previous winners to welcome the new winners into the Mystic Order of the Cheese Board. She was able to give it to Scalzi in Los Angeles. Dr. Schmidt and the Nippon 2007 committee were kind enough to work that piece of newly-invented tradition into the ceremony as if it were already a part of WorldCon history. And I got to pass it on to Naomi Novik.

What were, in your brief time there, your impressions of WorldCon?
Um, like, this was Japan? And I only went for a day? (Yes, I crossed the world to drop in for one day on the Biggest Show in Science Fiction.) Impressions: Magical hot-wired toilets, Yokohama Sid’s Used Ferris Wheel Lot (“Come on in and take a spin”), the Maid Bar in the dealers’ room, the fact that Japanese fans have their own unique look while still somehow being quite familiar, Sargasso seas of shoes on the party floor, a green room you could land an airplane in, being programmed wall-to-wall, the Norway-Sweden fan party which was so crowded it made the usual WorldCon Tor party look like a Georges Seurat painting (the ceiling was sweating with condensation from so many people talking at once), meeting Tom Doherty’s wife. bowing more times than I ever have in my life. I could go on. But I do actually recommend taking in a WorldCon the way I did at least once in your life–on the fly from far, far away. It compresses the experience in a fascinating way.

What was it like presenting a Hugo?
Fun and scary: you’re part of an honored tradition, and if, like me, you’ve never done it before – and only watched about 1/3 of a previous ceremony from up in the nosebleed seats – so you know how much it means to people, and how important it is not to do anything stupid. (Or so I thought: turns out doing something stupid is also part of the ceremony, and can be very entertaining and do much to relieve the tension. But all the same, I’d rather it were someone else.) The fun part was getting to get all dressed up, and sit in the Reserved section with all your heroes & friends. And to be part of an honored tradition.

What were your general impressions of WorldCon?
General impressions: The catering was fantastic. They put on rice balls, inarizushi, flavoured crackers, Pocky, chocolate, lots of different tea, biscuits–in the con suite as well as the green room. Not so good was the dealer’s room, which was very small; there wasn’t much in the way of books in either Japanese or English. The program guide was slightly confusing, with items that were not in the main conference centre building being listed both before and after the timetable for each day (but not on it). There were problems with the program scheduling–for instance some people, including myself, were put down for items we hadn’t volunteered for, in my case clashing with a guest I’d asked not to be programmed against. There weren’t a lot of bilingual items, which was a pity. I enjoyed the panels I was on, but basically this con was an opportunity for me to catch up with a few friends, meet a couple of Japanese readers I knew from online, worship Yoshitaka Amano, and eat free Pocky.