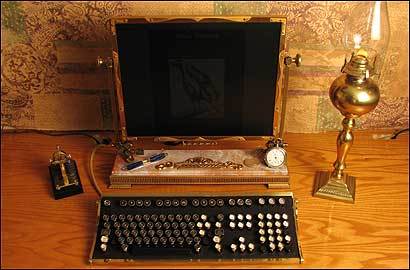 Peter also interviewed me and Jay Lake for the piece, but I guess those quotes didn’t fit the article.

Here’s what I told Peter…

Steampunk, it seems to me, is a kind of nostalgia. It’s nostalgia for a time when the consequences of our Industrialism were not yet known and for a time when the world was a less complicated place. It’s a form of escapism, which is perfectly okay. Because it’s fun. It’s inventive, and because some writers subvert the expectations of the subgenre. But I wouldn’t say it’s a reaction to current SF–too many current SF writers, like Stephen Baxter, also revel in writing steampunk. Steampunk, to me, is New Weird’s comfortable, relaxed cousin.

There’s also this kind of recognition that we could have gone with a different paradigm for transportation and industrialization. We could have dirigibles and things like that right now.

I think there’s interest in steampunk because it’s really no longer a “movement” per se. It’s more a series of approaches or techniques that almost every SF/F writer has used at least once or twice. There’s a sense that it’s time to kind of catalogue or remember it. I also believe it’s entered the popular culture in many ways, through elements of movies and other media, like Alan Moore’s League of Extraordinary Gentlemen in comics, for example.

This is also a time when, in SF/F for the last five or six years, you’ve seen radical re-invention and cross-pollination and I feel like we’re heading back into a possible time of being more conservative and reactionary. So steampunk is part of that. I don’t say that in a negative way at all.

2 comments on “Steampunk in Boston Globe”