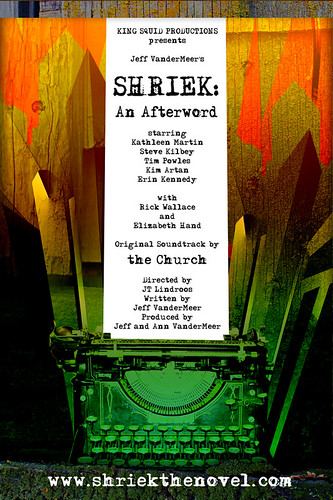 I’m happy to announce that the Shriek movie directed by Juha Lindroos, with an original soundtrack by The Church, is now available on the internet. Please feel free to spread the word! This is a shorter, different version of the movie shown at the Shriek parties last year.

You can access the higher-res/smaller screen version or the lower-res/larger screen version. (Thanks to Charles Goran for technical assistance and Garry Nurrish for swift site updating.)

Note: As Tessa says in the comments below, if you have trouble loading/viewing, “It will just be the buffer running out – not downloading fast enough to keep up with the streaming. Start it, and press pause, and then ignore it for a while to let the buffer build up, and it will play smoothly.”

The movie and a whole lot of cool video and audio can all be found on the Shriek website.

As many of you know, Shriek is now out in trade paperback from Tor. Show me some love by picking up a copy if you like the stuff you find on the site. Try Amazon or Forbidden Planet in the UK, or your favorite local bookstore.

SHRIEK: THE MOVIE
A city at war with itself. A night beyond imagining. And… aftermath. A short indie film about memory and transformation by Finnish director J.T. Lindroos, from a screenplay by Jeff VanderMeer, with an original soundtrack by the legendary art-rock band The Church. The film opens with Janice Shriek typing up her memoirs from the backroom of a bar, and being interrupted by bar patrons (played by Steve Kilbey and Tim Powles from The Church!). Influenced by early surrealist films. Set in Jeff VanderMeer’s fantastical city of Ambergris.

Voice cast includes Kathleen Martin as Janice Shriek and Steve Kilbey & Tim Powles from The Church. With character images by Elizabeth Hand and Rick Wallace, and art by Scott Eagle, Steve Kilbey, and others. 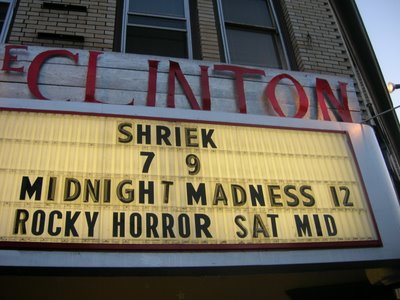 (Showing of the movie’s rough cut in Portland, one of over 25 events in the US and Europe)

The Feel of the Film

I really liked the idea of creating an intentionally grainy feel to the movie, one that got across the idea of this being a faded transmission, coming to you from some strange other place. A dream or nightmare. I didn’t want a literal interpretation of Ambergris. (There are also some playful allusions to old surrealist films and some classic low-budget indie films.) Juha had the idea of using different filters for different sections to create different moods.

We also wanted to make sure we had a great soundtrack and voice-over, so we invested heavily in that. I think The Church’s music is just amazing. (And they’ll be releasing an internet-only CD of all of the music, close to 50 minutes-worth, in the near future.) I also love Kathleen Martin’s evocation of Janice Shriek. I really can’t see her voice as sounding any other way now.

Back when we were finding the images for the film, Boing Boing was kind enough to run our note about a casting call for dead people. You can see some of the entrants here, two of whom made it into the movie (albeit briefly).

(Erin, my stepdaughter, posing as a dead person…badly)

To shoot some additional footage for the director, Ann went off with our daughter Erin, her boyfriend John, and James, a friend of theirs. The scene involves two people hunched over a body in the middle of rubble, during the Ambergrisian War of the Houses. So they found a nice rubble-strewn, grass-sticking-through-pavement-crumbling-building-in-background area and set up for the shot. Erin and John were to hunch over James, who would play the dead guy, and then Ann would do three or four different approach shots: running at them from a distance, walking at them from a distance, and then strapping the camera to a skateboard and getting a ground-level view, closing in fast. Unfortunately, as they were setting up, a cop drove by and thought that what was going down was a murder–James was being too good a dead guy and Erin and John apparently looked too predatory. So Ann had to quickly run over before the cop called in back-up and James the Dead Guy had to quickly rise from the dead to reassure him no crime was being committed (except the possible crime against Art). Really, the funniest part of all this is that James didn’t even know what he’d been roped into until they all go over to our house. He’d thought he was going to have to help John move furniture or something. Nope–we need you to play a dead guy, we said. “Oh–no problem,” he said. “I’ve got lots of experience. Or near experience.”

The Shriek movie blog documented events and related topics in 2006 when the original rough cut was being shown.

This
work is licensed under a
Creative Commons Attribution-NonCommercial-ShareAlike 3.0 License.

…if you want more information, please email me at vanderworld at hotmail.com. (The Church’s music in the movie will be released under a separate Creative Commons license that allows use but not alteration.)

31 comments on “Shriek: The Movie Released on Internet”